the Star Wars obsession hit fast and furious with this kid. 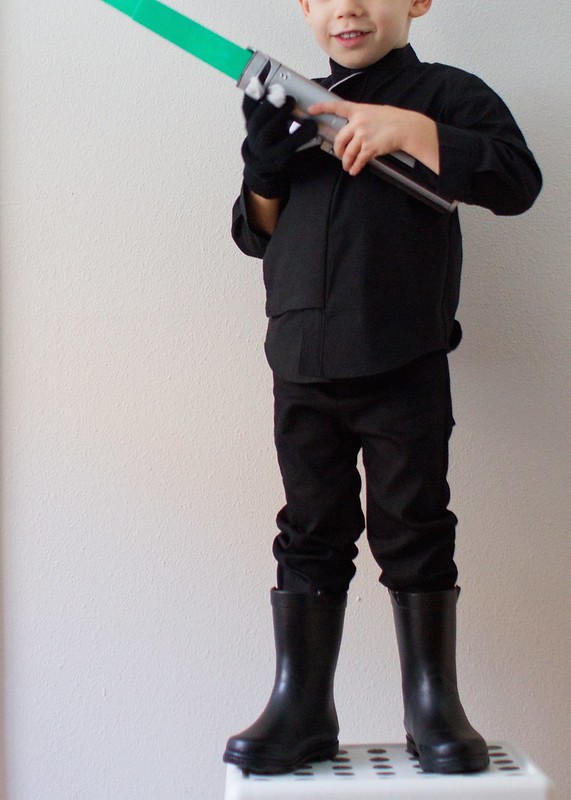 it started with him watching A New Hope with daddy (who had to field a barrage of questions about every little detail of the movie as it played – hilarious) and quickly progressed into checking out books from the library, building Star Wars lego sets, and turning every tubular object in the house into a lightsaber.  his knowledge of the movies is super impressive – i’m pretty familiar with the movies but he already has me beat on some of the details. 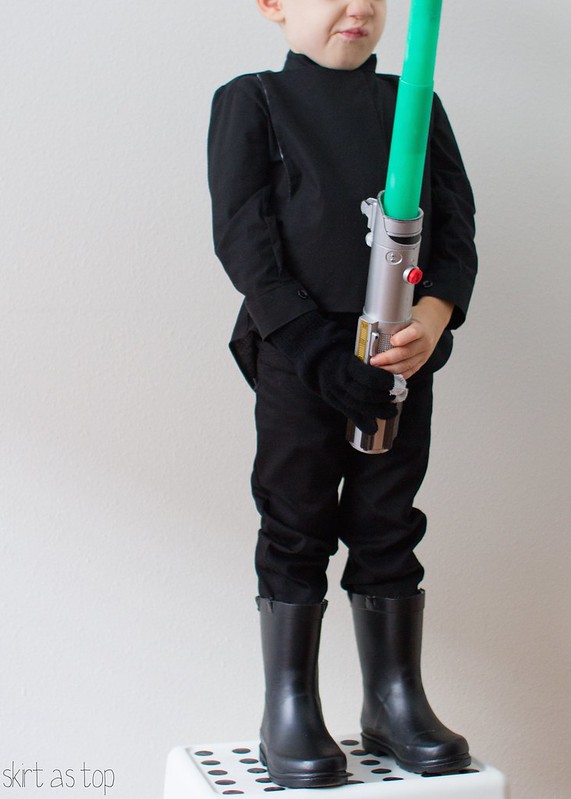 really, his Halloween costume was only a matter of WHICH Star Wars character he was going to be.  he decided on Luke Skywalker, but which Luke??  New Hope Tatooine “muslin pajamas” Luke?  Fighter Pilot “orange jumpsuit” Luke?  At one point he even wanted to be “Luke when he’s dressed up as a Stormtrooper when he rescues Leia!” 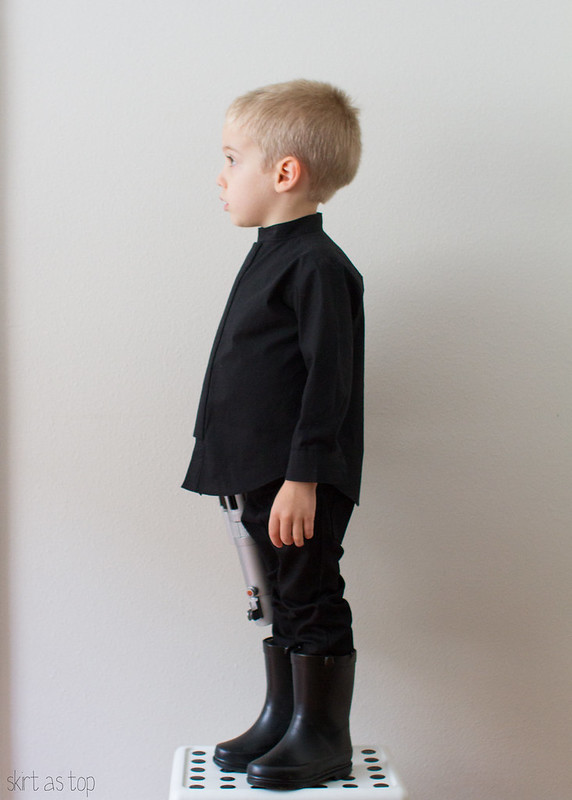 any would have been pretty fun to sew, really. 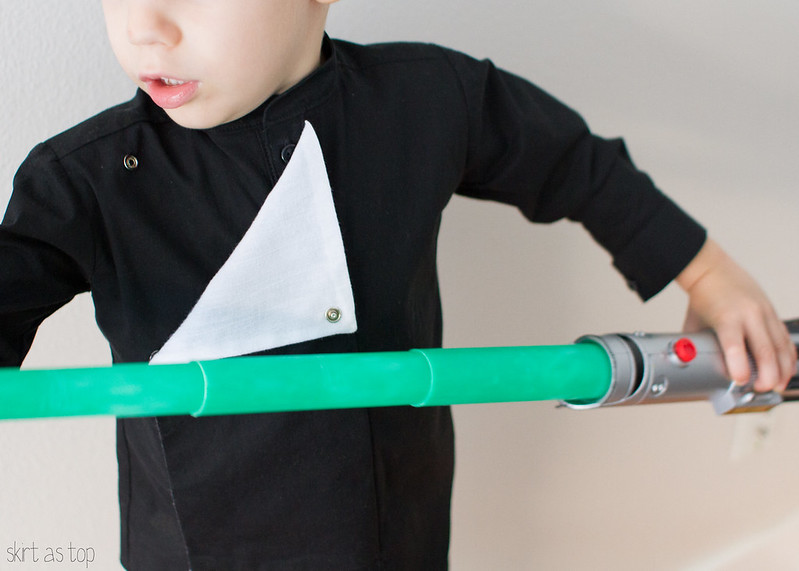 finally he settled on “black Luke from when he rescues Han Solo from Jabba the Hutt” in Return of the Jedi.  here’s a photo. 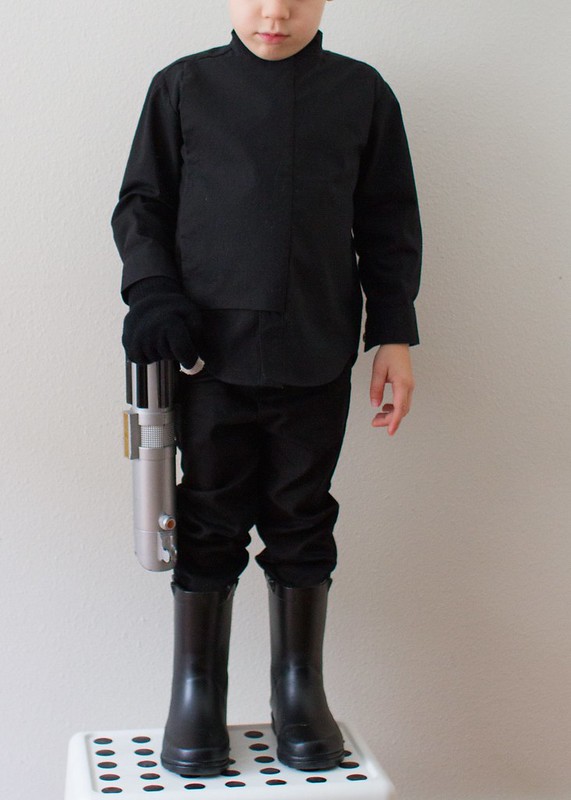 once he ordered up his Luke, i had a lot of fun bringing it to life.  i dunno, sewing in all black is kind of cathartic – i said it last year too.  black thread in the machine, black in the serger, and you just GO. 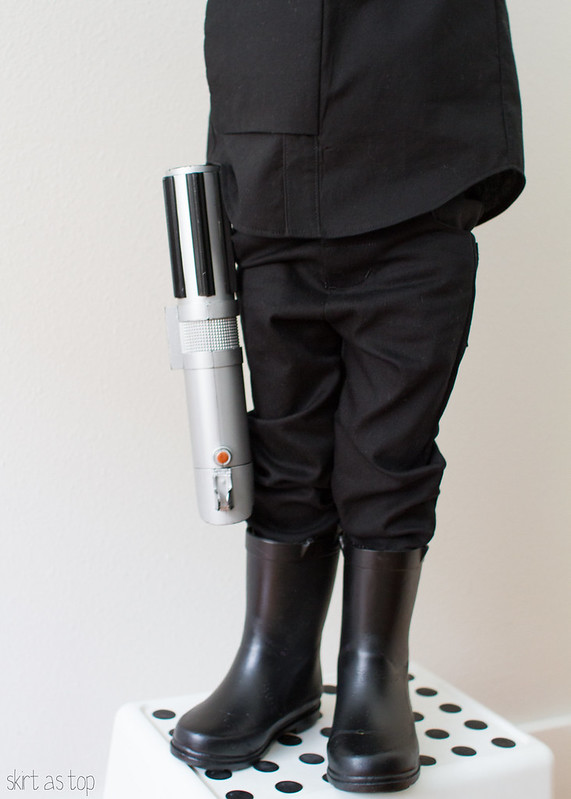 first, he and i spray painted a pair of his sister’s old rain boots black.  they were already black but had rainbow polka dots on them.  i just used some all-purpose spray paint i had in the shed so the paint job isn’t going to last, but they’ll work for a night.  i’ve already had to touch them up because he’s been wearing them too often.  haha. 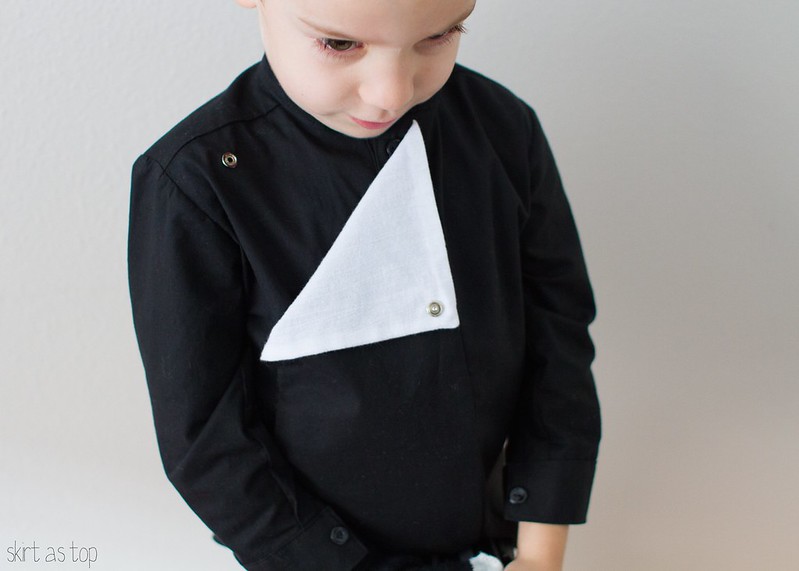 his shirt is an Oliver + S sketchbook shirt with View B’s band collar but View A’s long sleeves, size 2.  the shirt is made true to the pattern for the most part – i just slipped the bib thingie under the left button placket before topstitching it down.  the bib is a rectangle of black with white gauze – interfaced on the inside with three snaps so it can either snap up or down and the normal shirt buttons underneath are completely functional.  he actually likes to wear the bib up even though i always think of Jedi Luke with the white flap down. 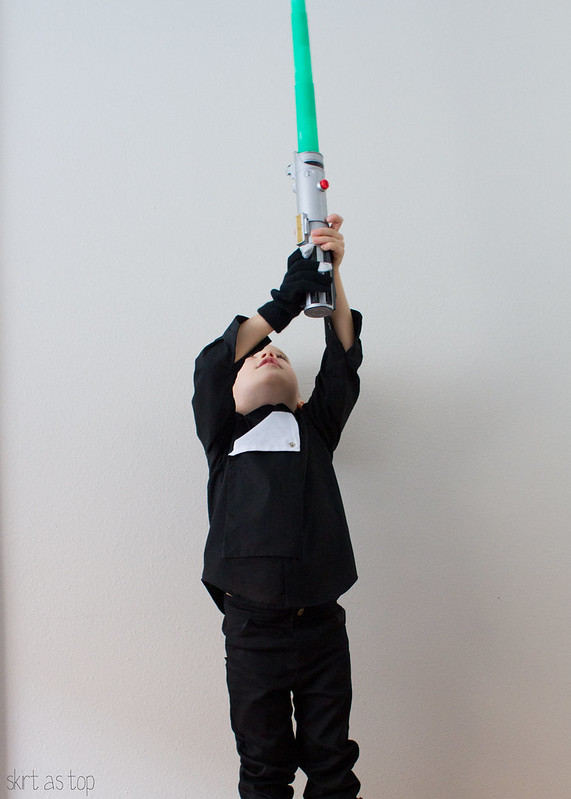 i basted the sides of the shirt and tried it on him because i remembered it being pretty boxy and wanted it more slim fitting to work with his slim fitting pants.  i ended up taking each side seam in by 1” (sewed 1/2” in from the original basting line on each side) and love the fit on him.  the fabric i used is american made brand fabric in black, which i got at Bolt.  it’s a pretty crisp cotton to start but softens up after a few washes. 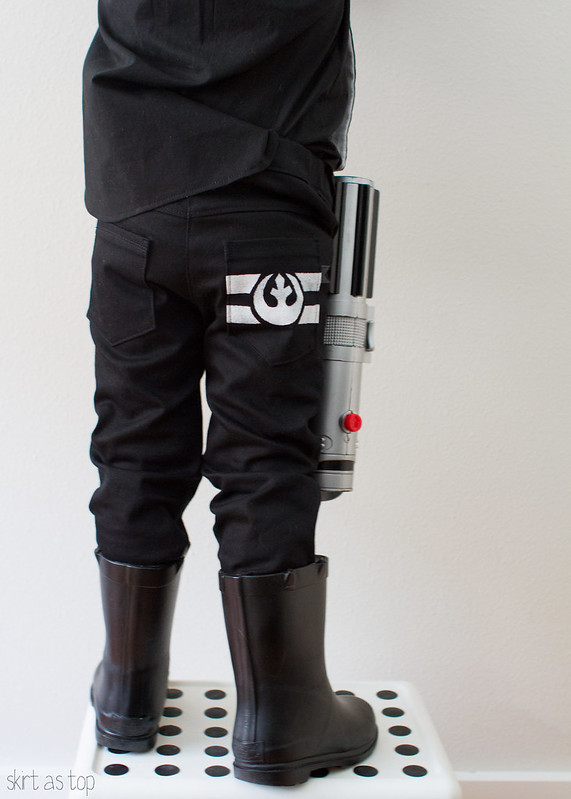 his pants are small fry skinny jeans in a 2T with 3T length (not that you can see the length).  the jeans i made last spring now fit like a dream, so i knew that was the right size to go with.  the material is stretch twill from JoAnn, which was great from a comfort standpoint but didn’t take paint very well on that freezer paper stenciled pocket i made.  oh yeah, that’s the rebel alliance logo!  i drew it.  pretty proud of that detail.  heh. 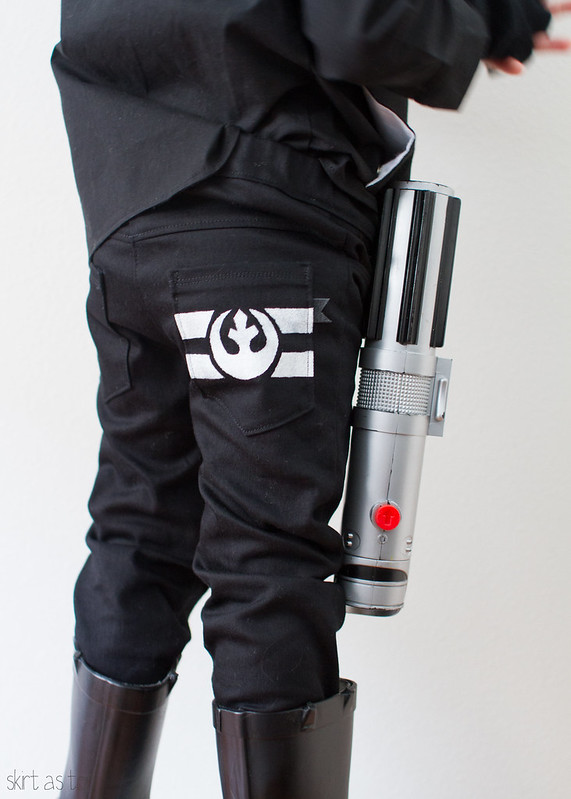 i skipped flat felling on the pants and just sewed those seams with a 3/4” allowance (the pattern thankfully gives that measurement) then serged them.  i topstitched the seams where it seemed like it’d be a good idea but these didn’t need all the extra jeans topstitching, so that saved time.  i used some awesome Lizzy House constellations fabric on the inside waistband and closed the half fly with a snap.  i didn’t have any buttonhole elastic, so i did an elastic waistband only in the back (that’s not in the pattern instructions but have done it a million times on Oliver + S patterns). 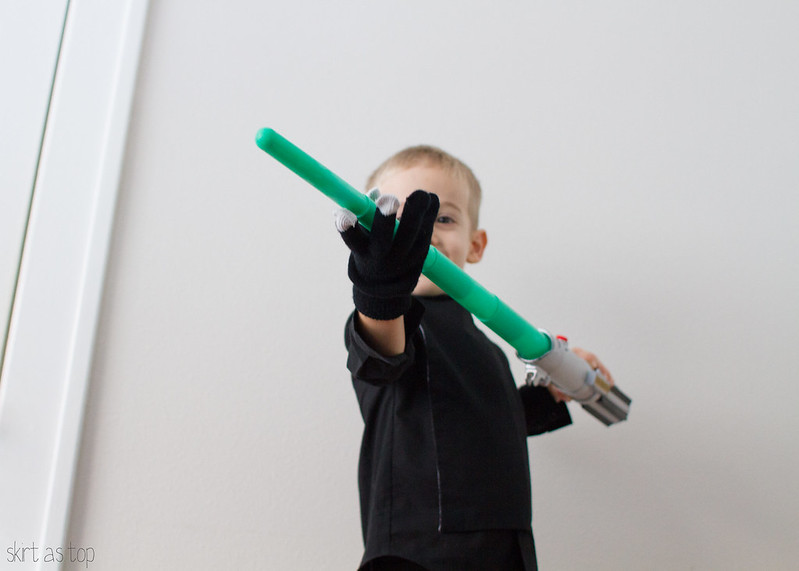 if i’ve learned anything from how much his film petit outfits remain in rotation, this boy loves to wear costumes as everyday wear, so i made these both “real” clothes that he can mix and match with other things.  the pants look great with just a t-shirt on top, and the shirt would look cute with shorts and the sleeves rolled up. 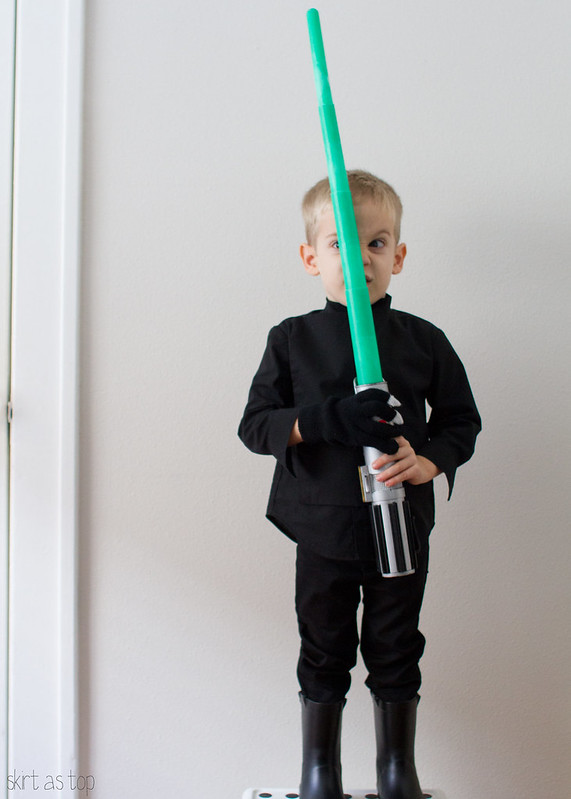 he’s beyond thrilled with the whole costume and he’s gonna flip when he sees the glowing green foam lightsaber we ordered for him to trick or treat with.  this lightsaber is his cousins’, who are a few years older than him and more than happy to encourage his Star Wars obsession. 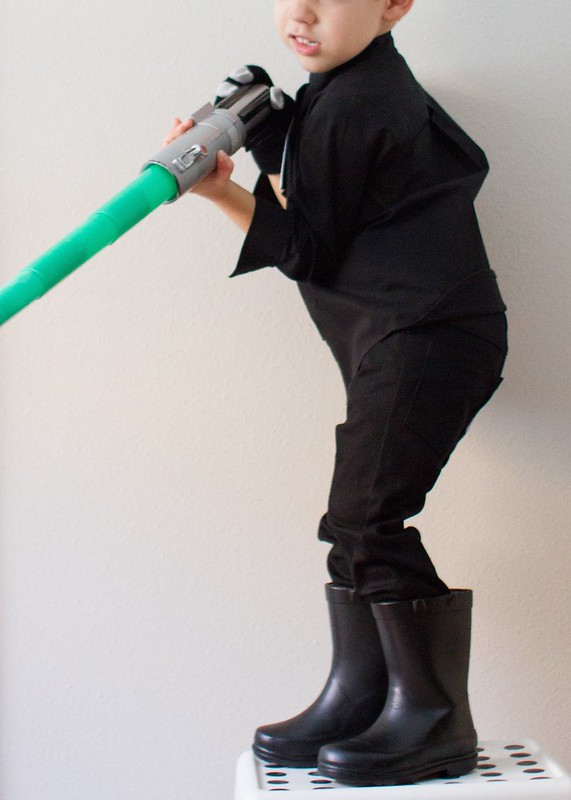 i would be a bad blogger if i didn’t give a big shout out to Ari over at Max California and her very cool son in his Luke costume which was a major inspiration for me.  i definitely showed her post to O before i started sewing, and he approved. 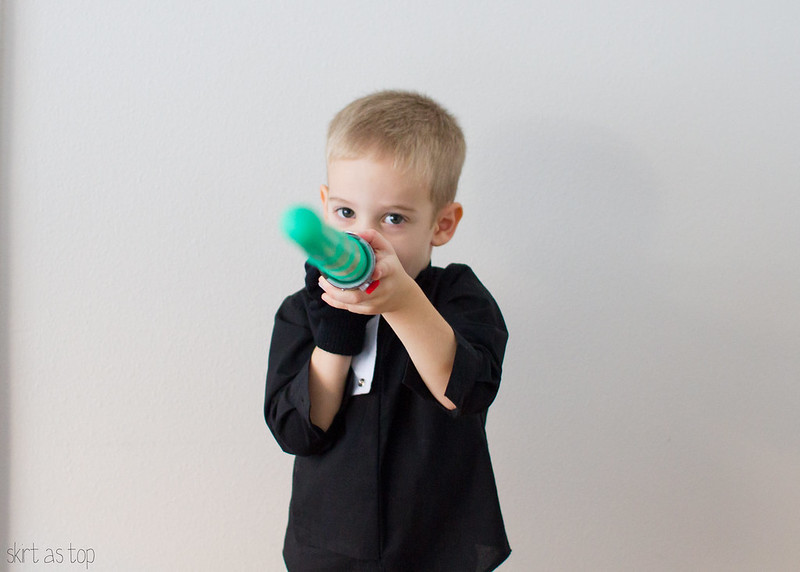 Ari and Kat at Sew Chibi are currently running a rad series called Sew Geeky and October’s theme is Geek Spectacular, I’m gonna go ahead and throw my little Luke into their Sarlac Pit of Awesome this month, finally!  SUCH a fun series to follow along with.  check it out!