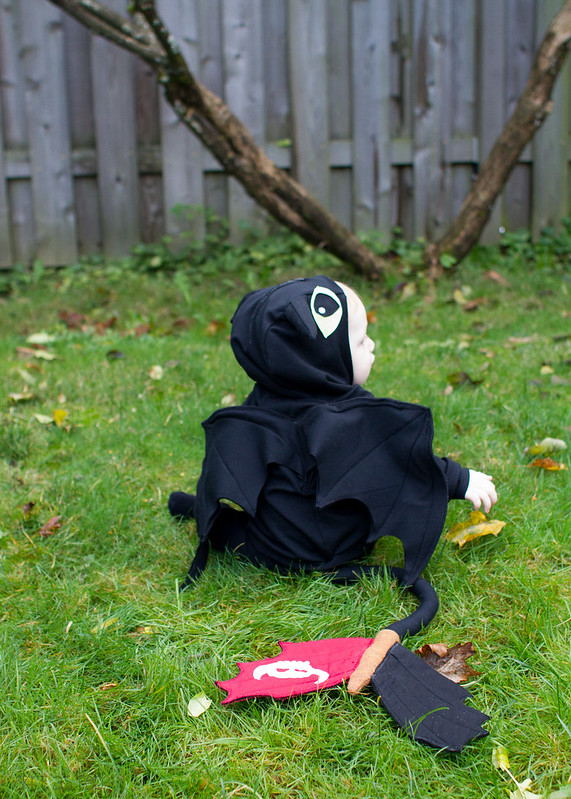 i had already put a lot of the accessories together bit by bit, but sewed the majority of the costume the night before Halloween.  when we tried it on him the next morning (and any time since), the whole family giggled.  it’s just so cute on him!!

i actually wasn’t sure i’d be able to pull this one off and tried to find a black hoodie to let myself off the hook a little bit sewing-wise, but couldn’t find one!  plus the perfectionist in me wanted the fabric to match…so, i made the whole outfit (except the socks). 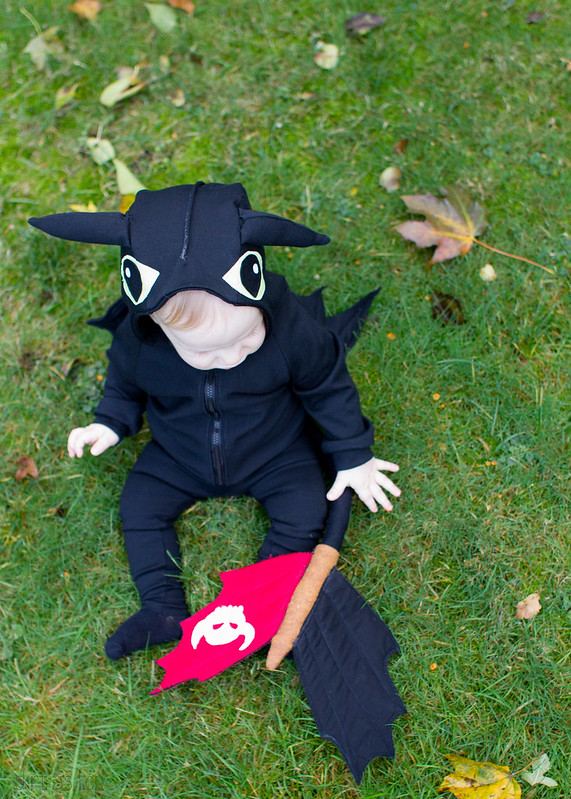 if you’re unfamiliar, Toothless is a Night Fury dragon from the How To Train Your Dragon books/movies.  i haven’t seen the second one, but the first film is one of those kid movies that’s actually fun for parents to watch, and Toothless seemed perfect for my actually toothless almost-nine-month-old baby (though i think a tooth or two are coming any day now).  Toothless is cute and sweet and sensitive, but he has a bit of a stubborn side too! 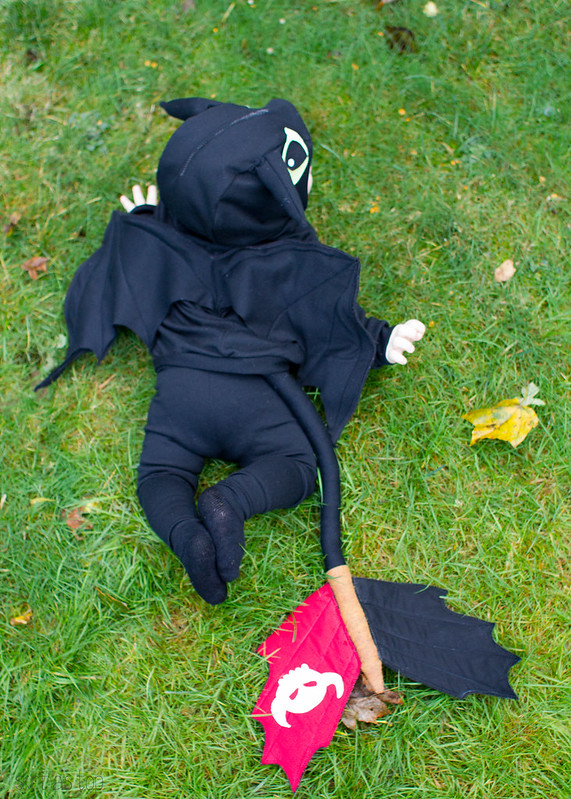 he’s in all Oliver + S (plus self-drafted) pieces.  his pants are playtime leggings (6-12 months and so tight on his fat little legs, haha!), and his hoodie is an 18-24 month field trip raglan plus XS cozy winter hood (from little things to sew – affiliate link).  i modified the hood shape and attached it to the raglan, then added a separating zipper and cuffs. 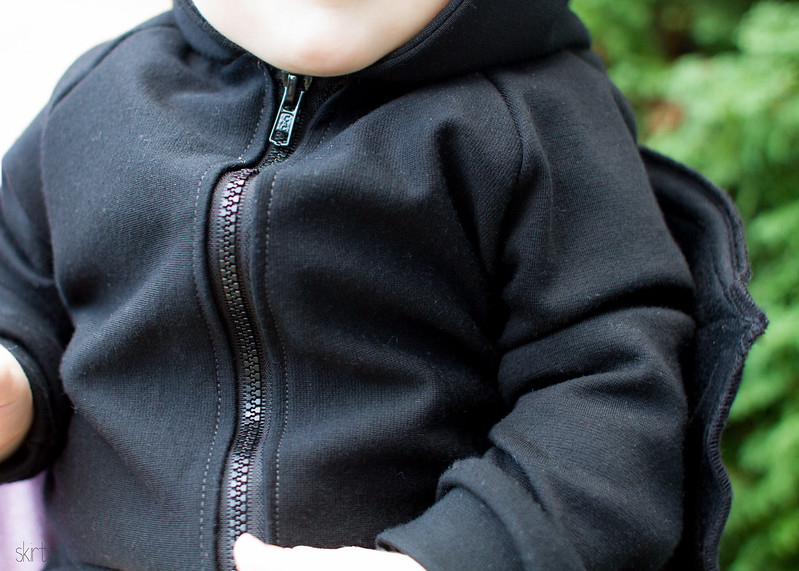 i added wings to the back by quilting two pieces of jersey knit with a layer of felt in between as batting, then shoved a couple pipe cleaners in there for structure.  the wings are topstitched to the hoodie.  i actually added a center seam to the back of the raglan too which is a detail that only i notice.  i had thought i might add more ridges to the back but i opted to keep it simpler in the end. 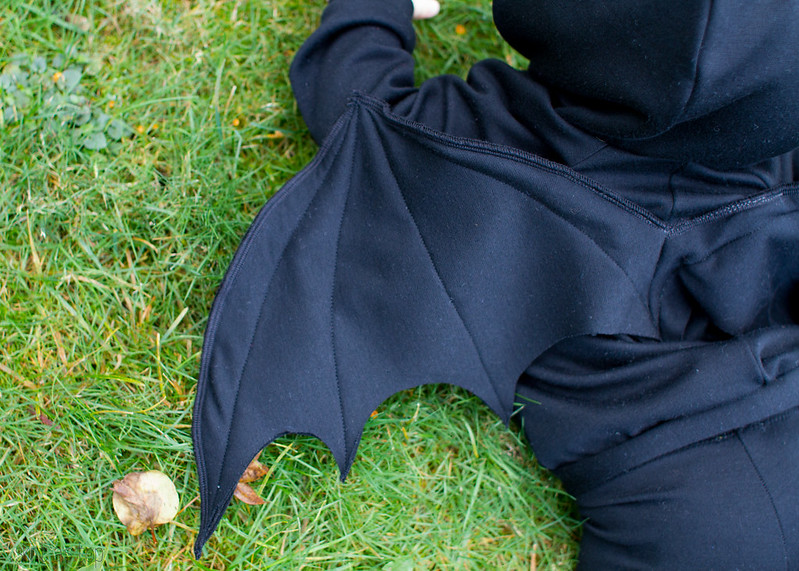 i added ears, eyes, and a pin tuck ridge to the hood. 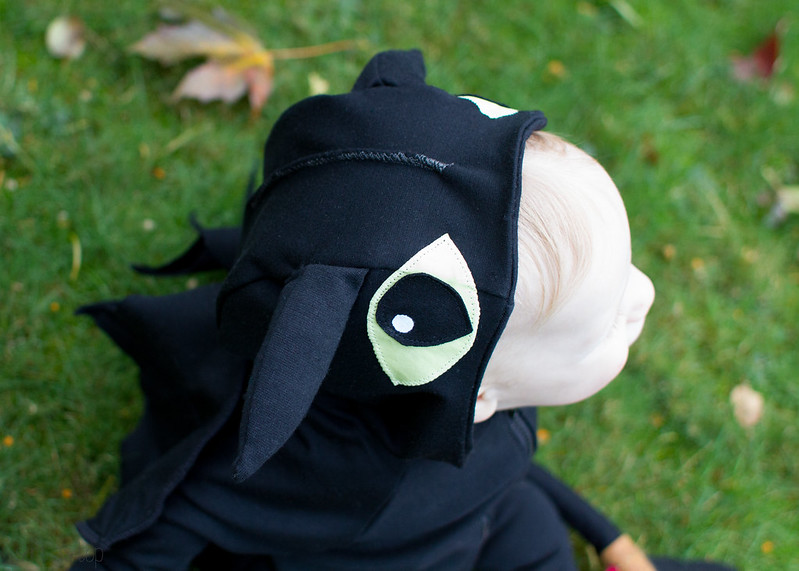 the entire outfit is matte black jersey (i think that’s the right link – i got it in the store) from joann – really nice stuff!  very soft and just the right weight/feel for clothes; i think i need to go get more and make something for myself with it.  the eyes are a green solid that i painted with glow paint and sewed on with glow thread, so they actually glow in the dark!  my big kids LOVED that touch (and i did too, let’s be honest.  glow stuff is the best).

the eyes weren’t looking quite right until i added the anime-esque white dot to the pupil, then they came alive.  kind of amazing what a little white dot will do. 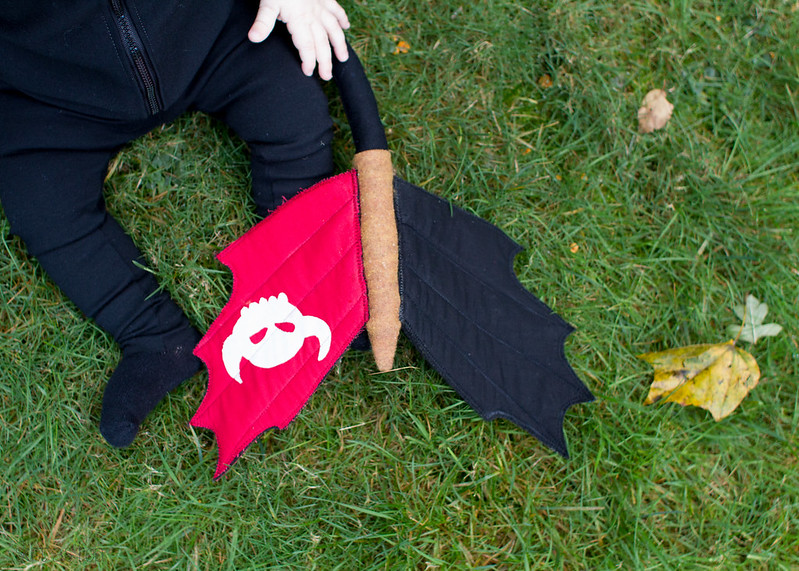 his tail (with prosthetic tail fin) is cotton quilted with two layers of felt between.  the hairy hooligan insignia is a freezer paper stencil.

the tail is detachable and i safety pinned it to my ergo carrier on halloween night so it hung down while baby Toothless rode on my back (i threw together an Astrid costume – no good pics of us together because it was already dark when we went out).  he also loved to use his tail fin as a teether (of course). 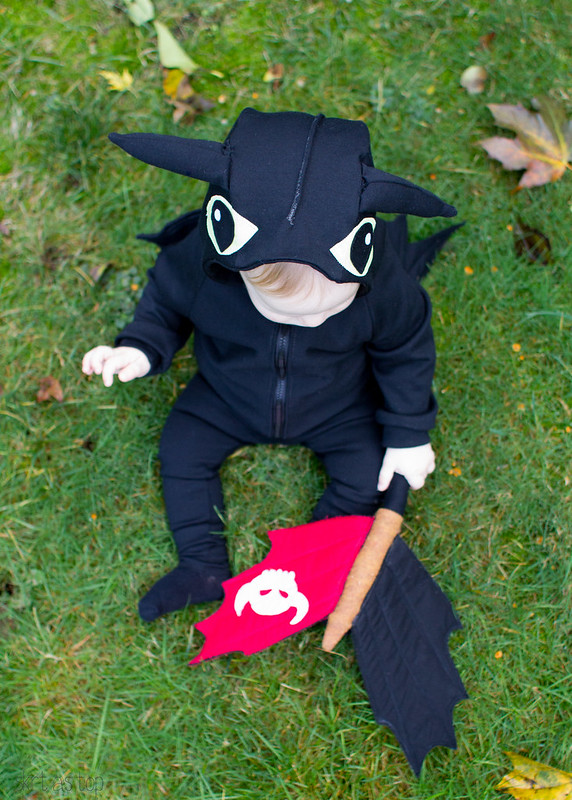 i thought he’d fall asleep while we walked around but he didn’t, he just quietly looked at all the costumes while E & O trick or treated the neighborhood!  he stayed warm and cozy and adorable on my back.

seeing his round face peeping out of the costume was just the best, and now i’m wondering if i should just remove the (unwashable) wings and have him wear the hoodie all the time, or if i should keep the whole thing preserved as “dress up.”  i’m thinking it’s got to be everyday wear – it’s just too cute to only wear once!  he already wore the still-winged hoodie to E’s last soccer game on Saturday though…haha!  what do you think?  save it or make it washable/wearable?

> >  hope you had a great halloween!  come back monday for a peek at a cool project i got to work on – it’s why i had to post this on sunday!  😉