any good detective has a nemesis out there, just one step ahead and always hatching evil plots.  for STYLO i knew i wanted to make two looks, and i thought it would be really interesting to have the same kid playing both roles.  whereas my detective look was classic, i wanted the villain look to be fashion-forward.  i wanted a dramatic silhouette and to push the envelope a bit. 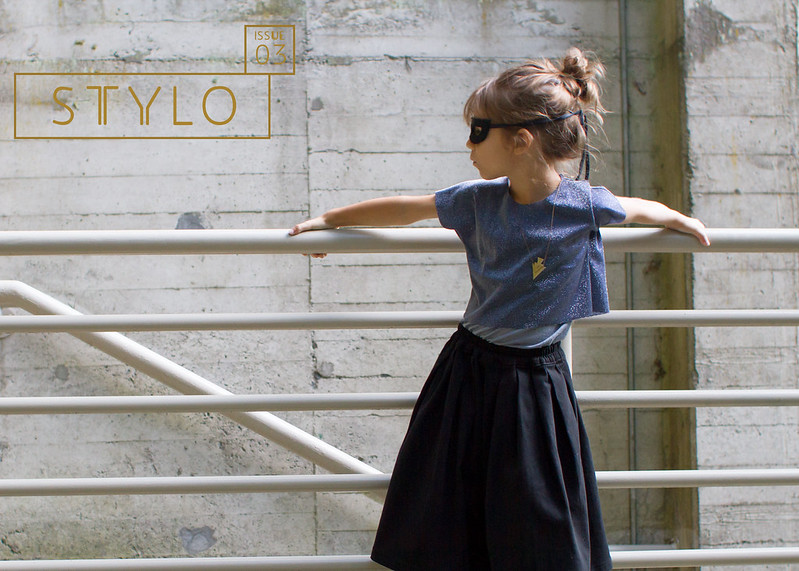 my villain resides in an ultramodern lair on top of a mountain.  she is shadowy, angular, cunning.  i used basic patterns sewn in new ways with interesting fabrics, and made a few accessories to complete the look.  but oh man, the location was the icing on the cake!

i couldn’t believe my luck when i found this place. 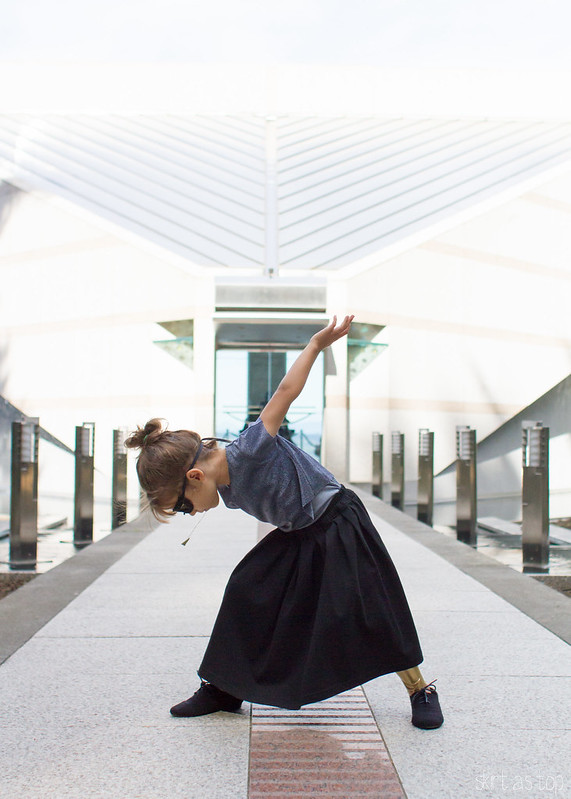 her top is the newly released Oliver + S lunchbox tee, in a 5.  i eliminated the neckline binding and the sleeve cuffs, making this one of the quickest sews ever (just shoulder and side seams, all done with a serger!).  it’s made in a drapey sparkle knit that i got for a film petit that hasn’t come together yet. 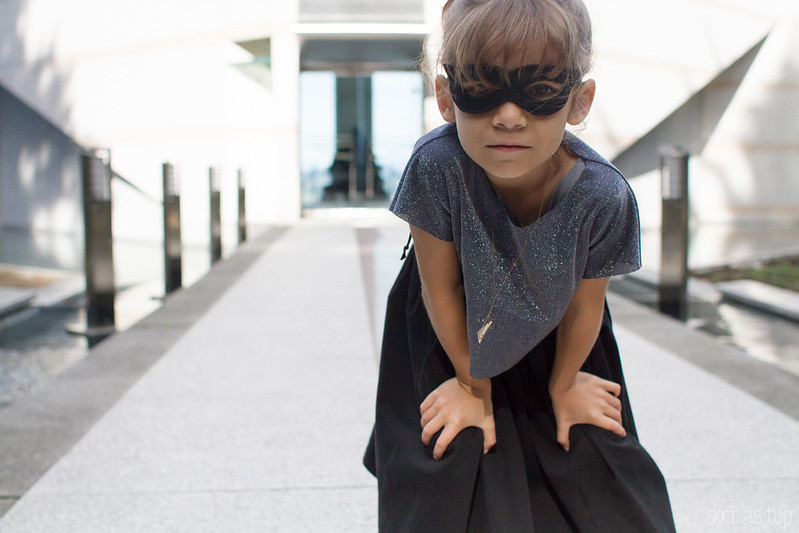 i made the non-pocket version of the lunchbox tee but cut it at the pocket line so it would be cropped. it’s layered over a soft linen flashback skinny tee tank top in gray linen jersey from this top.  she’s like a glittery storm cloud. 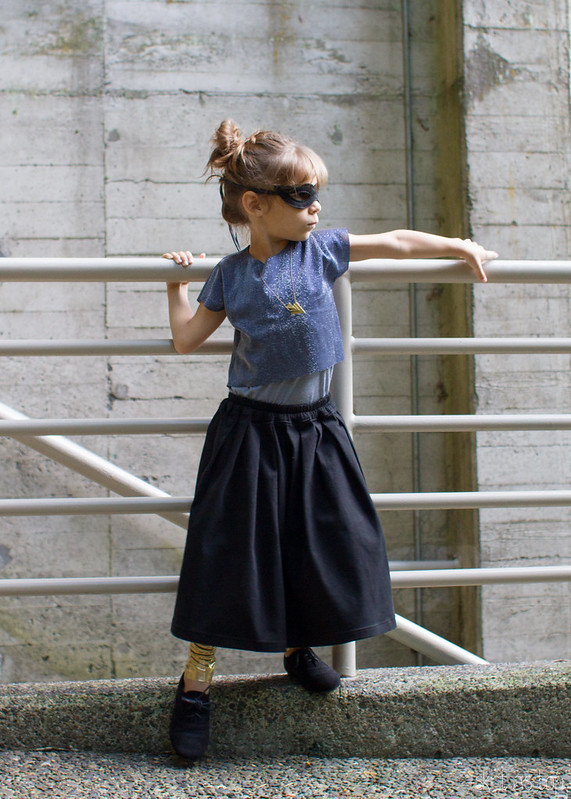 the skirt is a 2+2 skirt, lengthened to midi length with added pockets (tutorial here – similar skirt, but pleated instead of gathered).  i added more width to gain volume, and gave it an elastic waistband too.  it’s made in a black stretch twill from Michael Levine.  the leggings underneath are playtime leggings made in gold metallic spandex!  i love them.  i can’t remember where i got the fabric but i’m pretty sure it was Mill End during my swimwear fabric buying spree this summer.

i created the necklace with some scrap leather that i painted with gold fabric paint.  i hot glued the triangles together then threaded some heavy duty thread onto it.  it flew around a lot when she moved but i think the angles seem…evil…somehow? 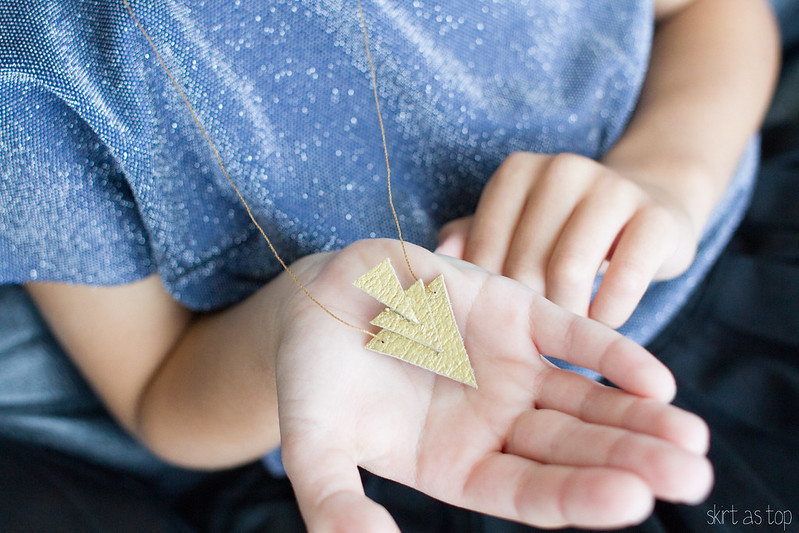 these photos were also taken at The Grotto.  you take an elevator up the side of a cliff to the upper gardens, and this building looks out north toward the Washington border.  it’s near the airport so you’re high enough to see planes coming in for a landing.  pretty cool.  there’s actually a plane on its descent in the bottom righthand photo below that E was watching. 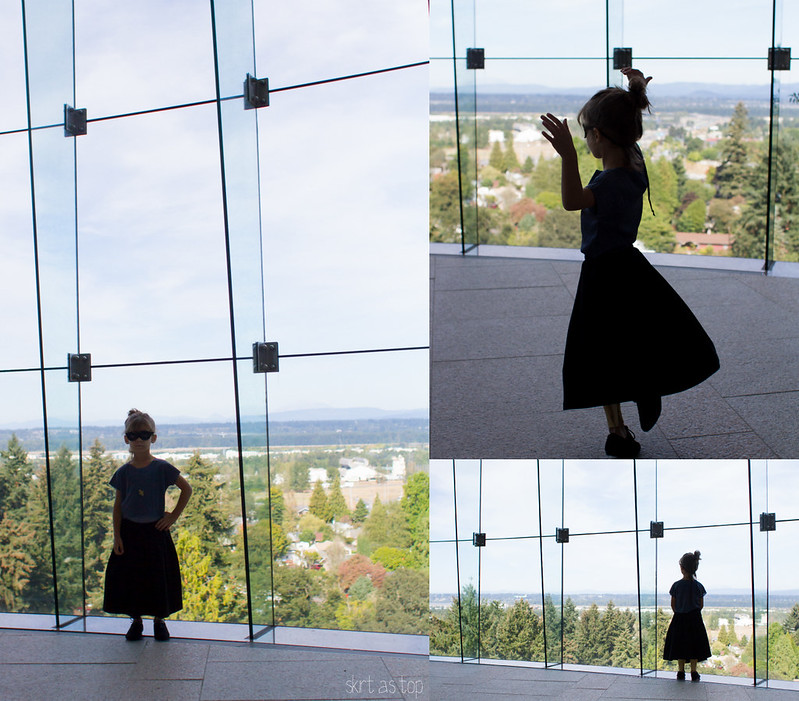 one last detail was the mask – i tried with both looks to conceal her identity but i didn’t want to have to do a lot of face-cropping for STYLO, so a mask was the natural choice.  it’s a simple little black felt mask with slight cat eye, and i attached some bias tape to tie it in the back.  i was hoping to release it as a free pattern before Halloween but got a little ambitious with the kids’ costumes and ran out of time.  maybe soon?  it’s a fun dress up staple. 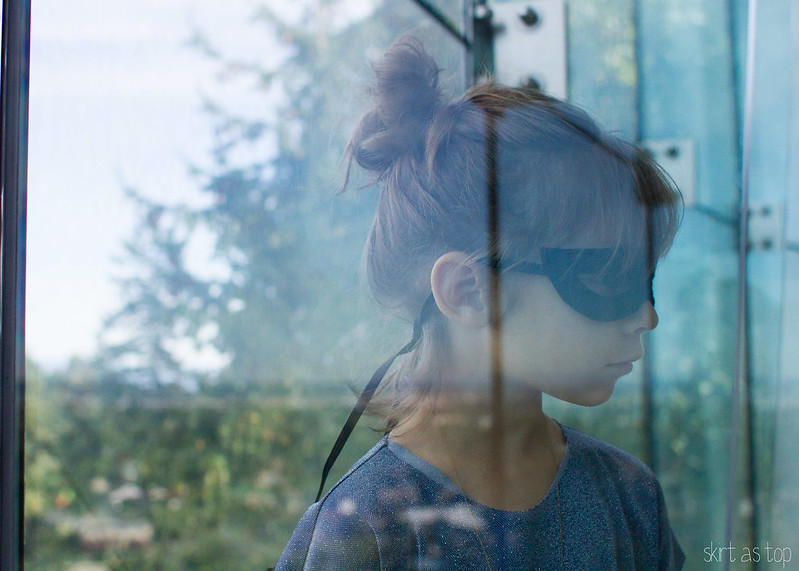 we took these photos on a Sunday but i didn’t get a chance to look at them that evening. the next day at work, i actually had a mini panic attack that the whole look was too weird, that the photos didn’t turn out, and i had convinced myself that i’d need to redo the photos and maybe sew a whole new look too.  i had decided it was all a disaster. 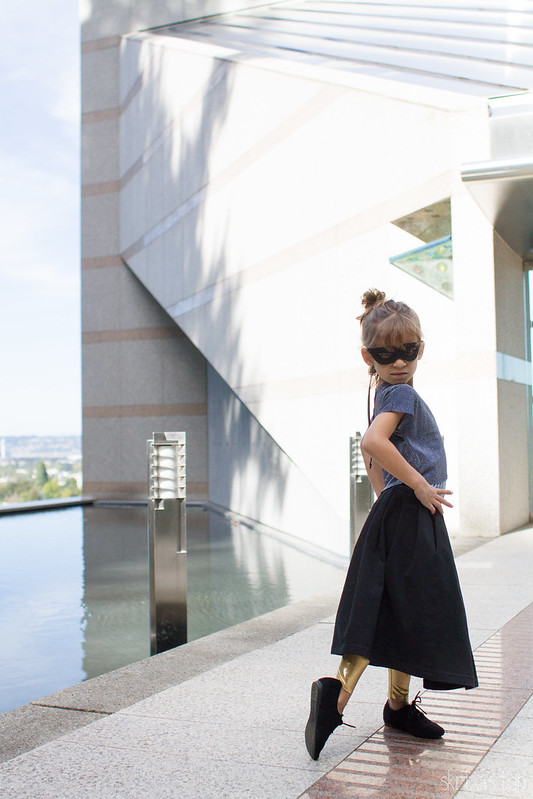 then when i finally got home and saw Em’s amazing poses and how the whole thing fit together, i realized i was super happy with it.  it’s just funny how you can convince yourself that a thing is terrible and then have emotions swing back to “never mind i actually like it!” so quickly.  reminded me of this. 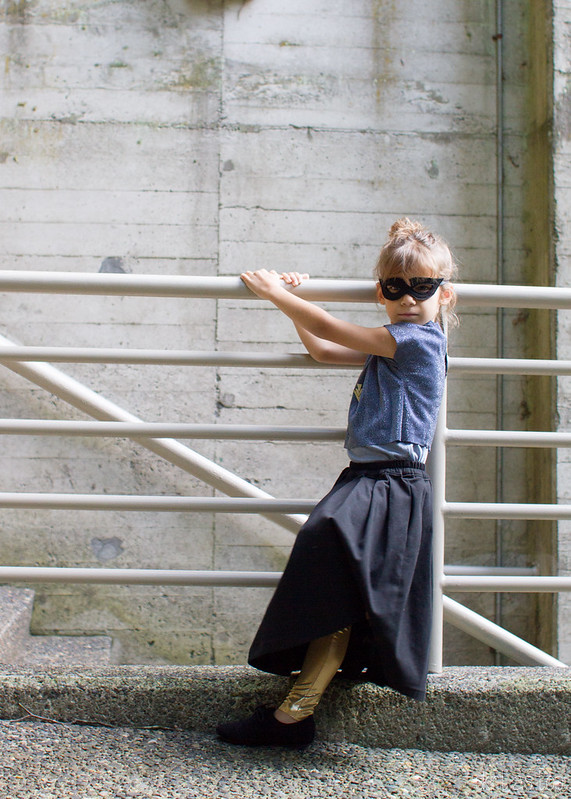 in the end, i’m excited about how this look turned out and it’s been fun to have these pieces in her wardrobe rotation.  metallic gold leggings go with everything! 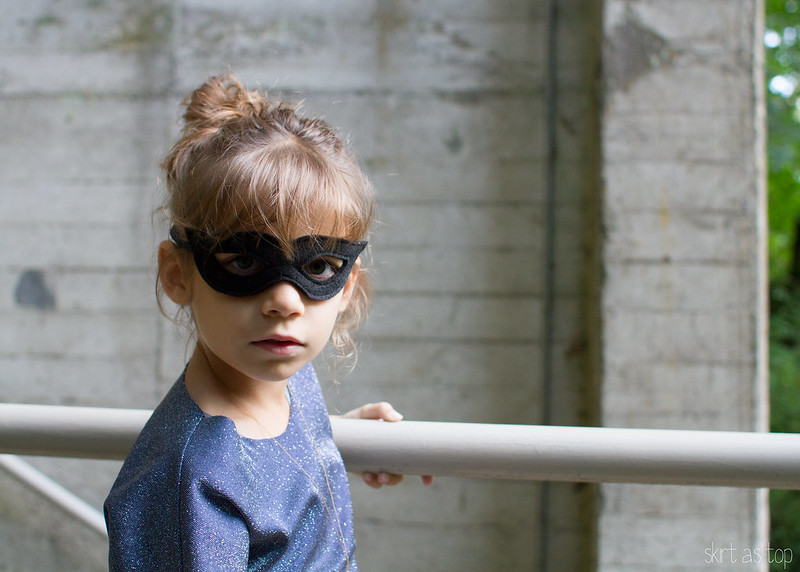 that concludes my STYLO recaps!!  thanks for following along.  see why i got a little quiet on the blog front for a while there?  haha.  as i’ve mentioned before – if the blog is quiet, i’m probably sewing up a storm.  if the blog is busy, i probably haven’t sewn a stitch (which is true this week)!  if both are happening, i’m just not sleeping…but i try not to do that as much as i used to.  it’s not good for me. 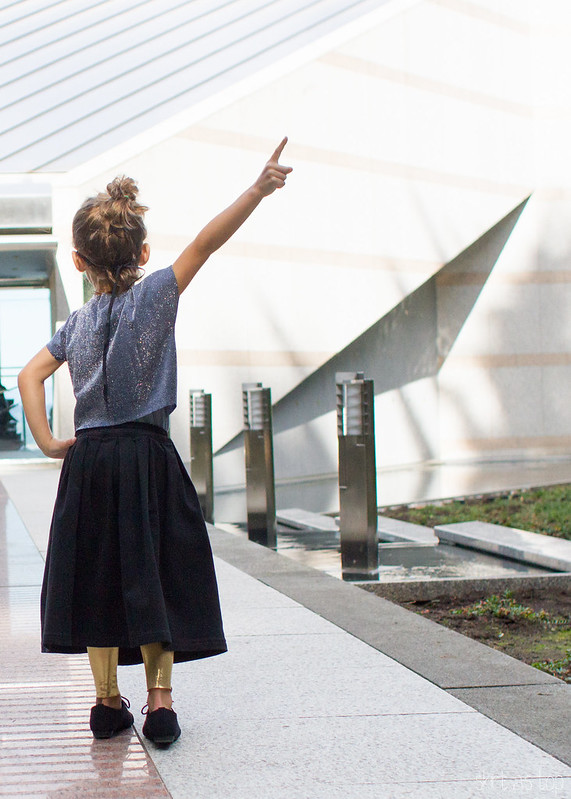 if you didn’t catch it yesterday, Michael Levine is offering a STYLO discount!  use the code “STYLO10” at checkout for 10% off your entire fabric order.

8 thoughts on “archvillain for STYLO 3”