and now, more about my detective look for STYLO 3!  have you made it through the magazine yet?  so good, right?

to tell you the truth, i’d been keeping a secret pinterest board with STYLO ideas since before the second issue came out in the hopes that someday it might come in handy.  i had sort of an ethereal floral theme going on that was pretty, but once i was actually invited to participate, i had a different brainstorm.  i really liked the idea of creating a detective, a smart, strong, capable girl – Sherlock Holmes influenced for sure, but still feminine, layered, fallish. 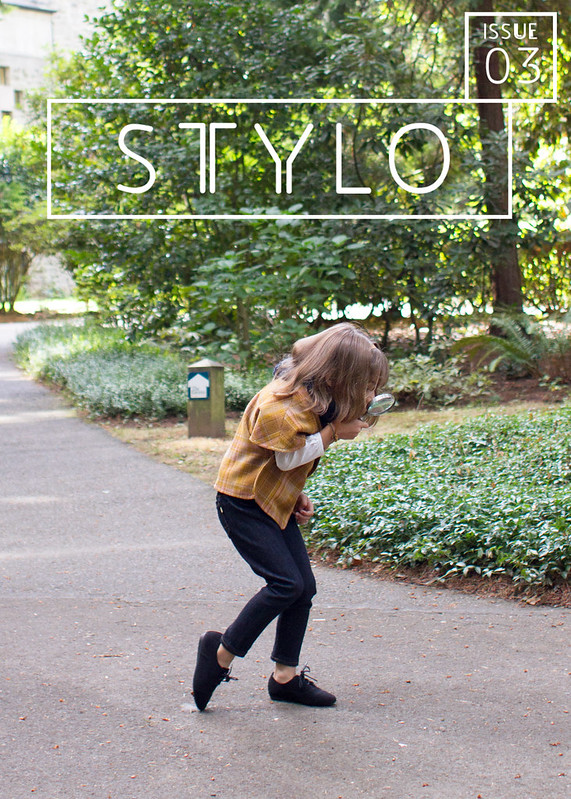 bit by bit, i gathered ideas and built my pinterest board with the help of some friends.  i tend to approach creative challenges by mulling them over and over in my mind until i’ve figured the whole thing out, and only then can i dive into the actual making.  i like to start with a general idea or theme, then work out the details – using the powers of deduction! 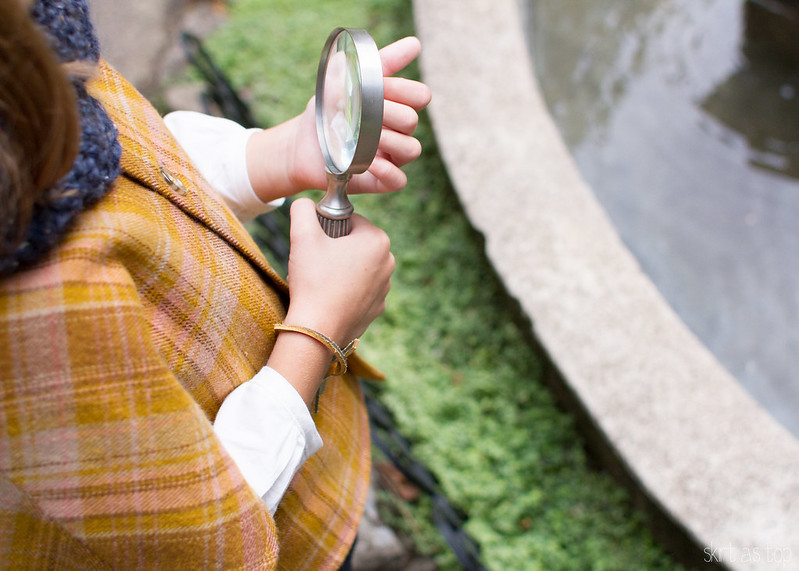 so yeah anyway, the intimidation factor was pretty high with STYLO.  i’ve been so inspired by the past two issues, it just felt like a lot of responsibility, you know?  i wanted to create more editorial look that would still be wearable in pieces.  and not long after i had come up with my look, Esther made this outfit and i was all YES!!  it was just what i was thinking. 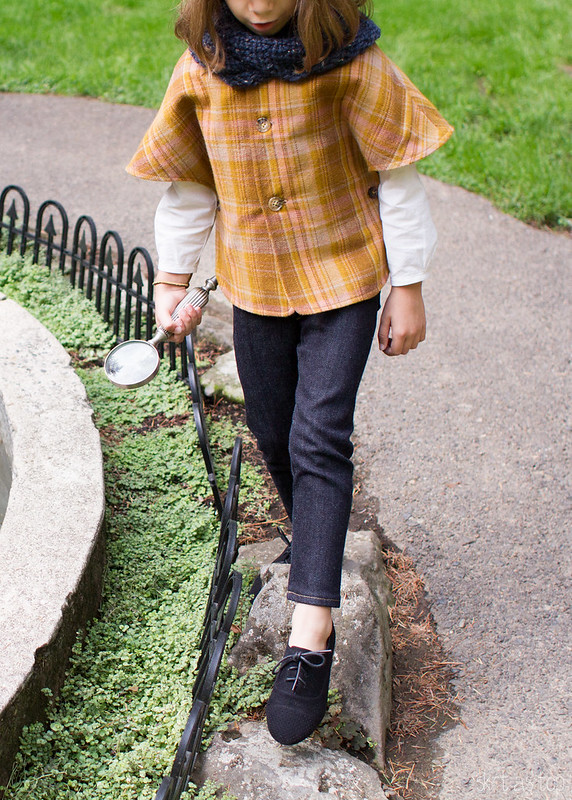 first, i knitted her cowl, using this yarn from Close Knit and this pattern (loosely followed, haha).  i wanted it to have a lot of texture and the broken rib was great for that.  it was fun to knit again!

her cape is an oliver + s forest path cape, 4T, in yarn dyed plaid flannel (provided by Michael Levine though no longer available – I found more here).  her pants are Loubee Hosh Pants, also a 4T, which i cropped to ankle length.  i sewed those in dark indigo stretch denim but added pockets and topstitching to create a faux fly and give them more “jeans” details, including an e on each pocket! 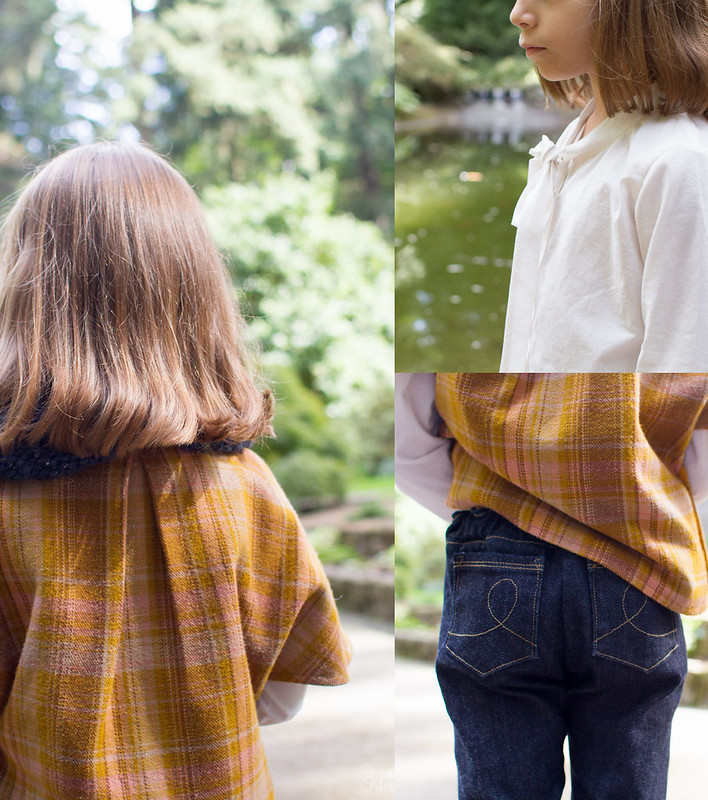 i actually cut the back cape wrong (cut two linings) and had to add an inverted pleat to the outer fabric to make it fit – i like it a lot! 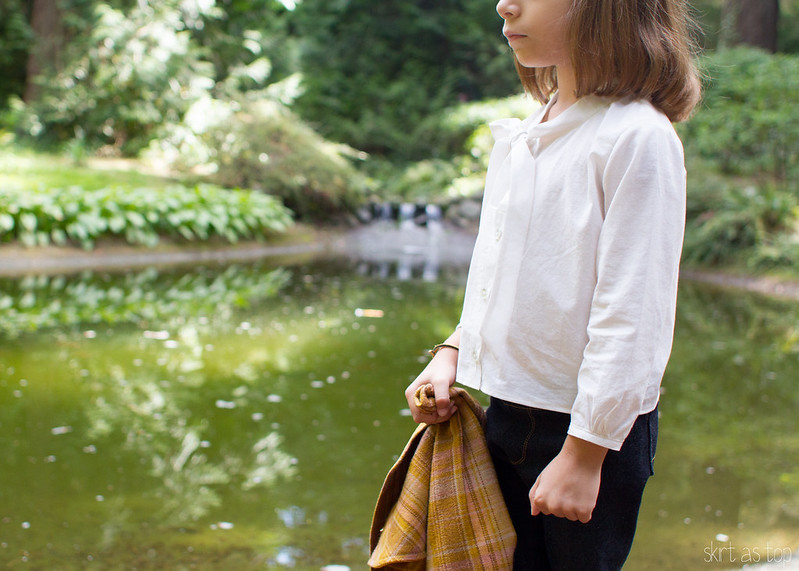 her top is an apple picking dress.  i was going to combine and modify a couple of other Oliver + S patterns to create a pussy bow blouse with this type of sleeve, but then spiegelstiksels made a gorgeous silk apple picking blouse for project run & play and i immediately knew that was my guy!  it was exactly what i wanted, i just never thought of that pattern. 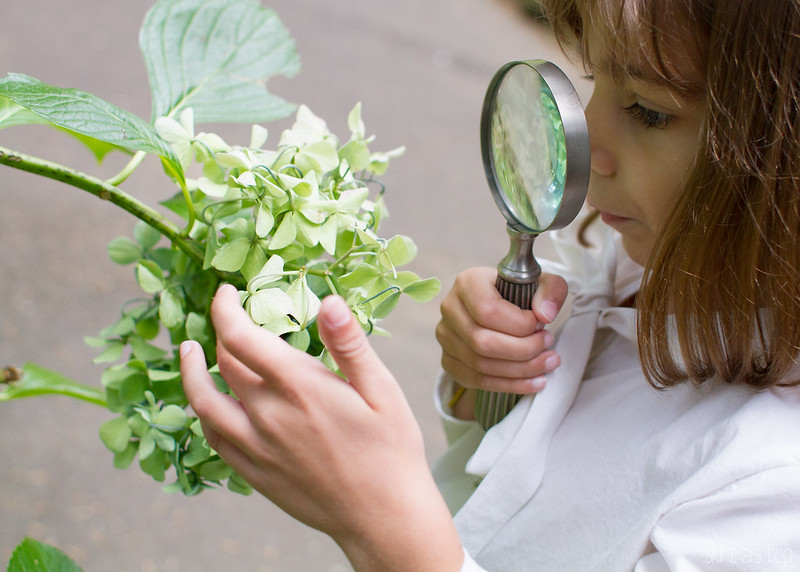 i narrowed the front placket so it would be single breasted and just eliminated the skirt.  i should have added length to it, but oh well.  the fabric for this one is amazingly soft ivory cambridge lawn by Robert Kaufman.  i loved sewing with it and the bow draped just as i’d hoped it would. 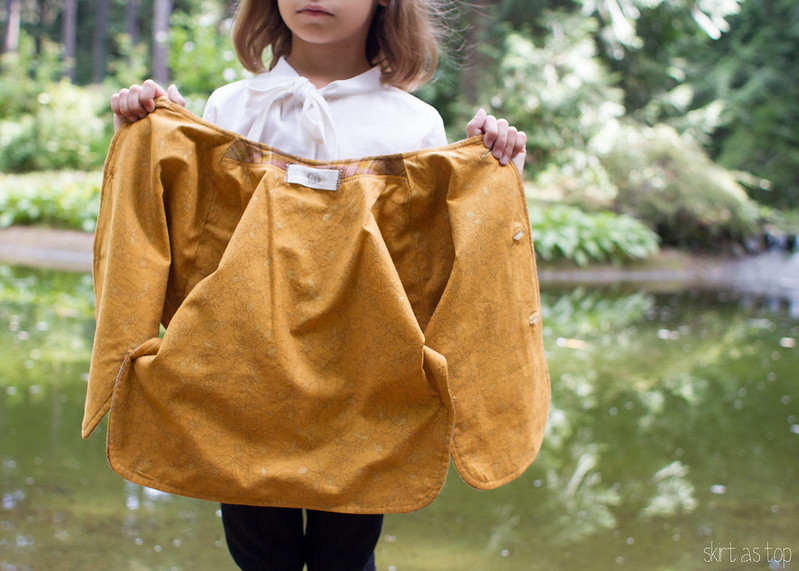 i lined the cape with Carolyn Friedlander’s Botanics line.  It has metallic gold bits and is just so pleasing to the eye.  i bought that at Modern Domestic but it’s also available online at Michael Levine.  the interplay of mustard, navy, and ivory just reels me in. 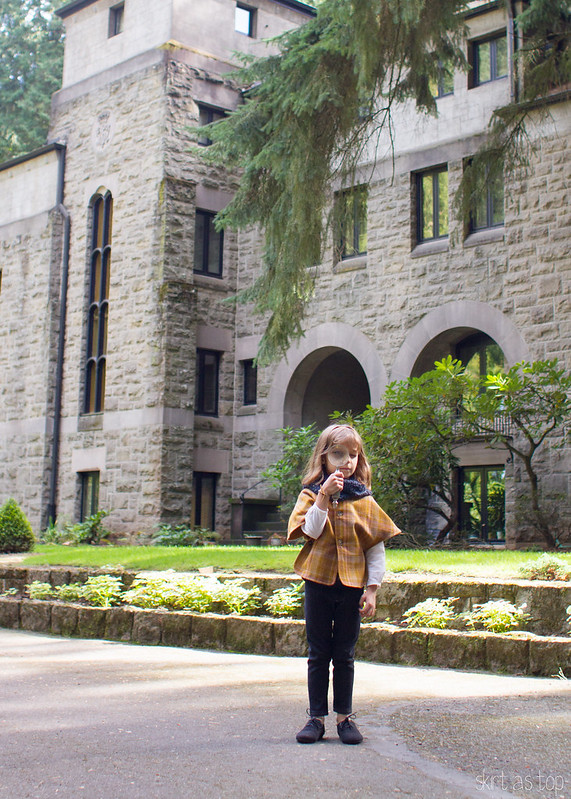 we took these photos at The Monastery at The Grotto here in Portland.  i’d only been there once as a kid but wow, what a gorgeous place.  it’s so peaceful and serene, oh and by the way it also has tons of great photoshoot locations all in one spot, haha.  i browsed their website when i first had the idea to go there and saw both this old English-style building AND an ultramodern building (for the villain look) just a short walk away from each other!  i couldn’t believe my luck.  plus tons of people were taking photos there so it didn’t even feel weird! 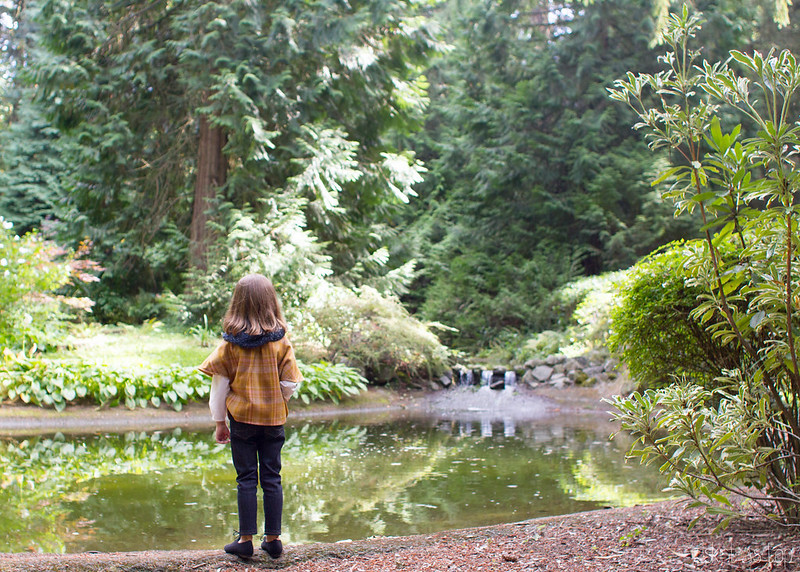 we borrowed the magnifying glass from my in-laws.  E got a kick out of posing with it even though she looks pretty serious here.  😉 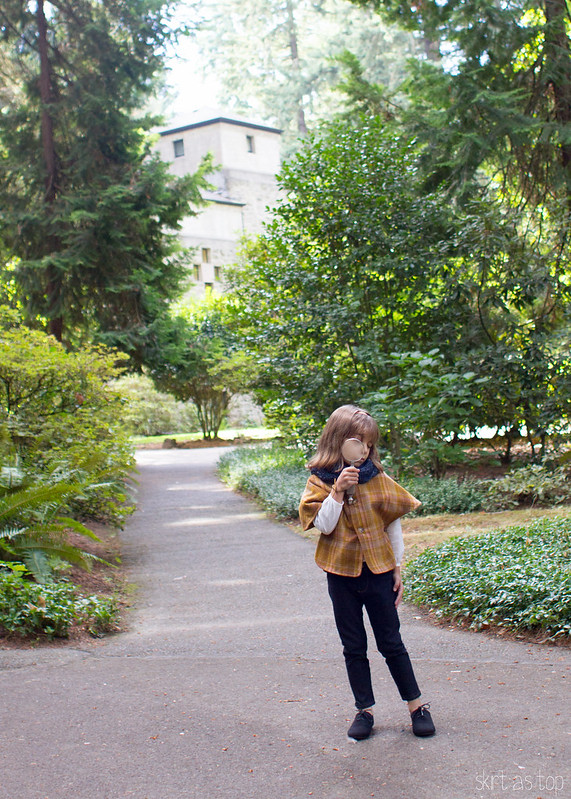 the contributing editors were given the option of getting online voucher to Michael Levine – a shop I had never ordered from before.  Michael Levine’s website can be a bit overwhelming to navigate unless you know what you’re looking for, but the fabrics I got from them were excellent, the customer service was responsive, and i’d highly recommend them!  they seem to do an especially good job with fashion fabrics – the plaid, denim, lawn and twill that i ordered…all great quality. 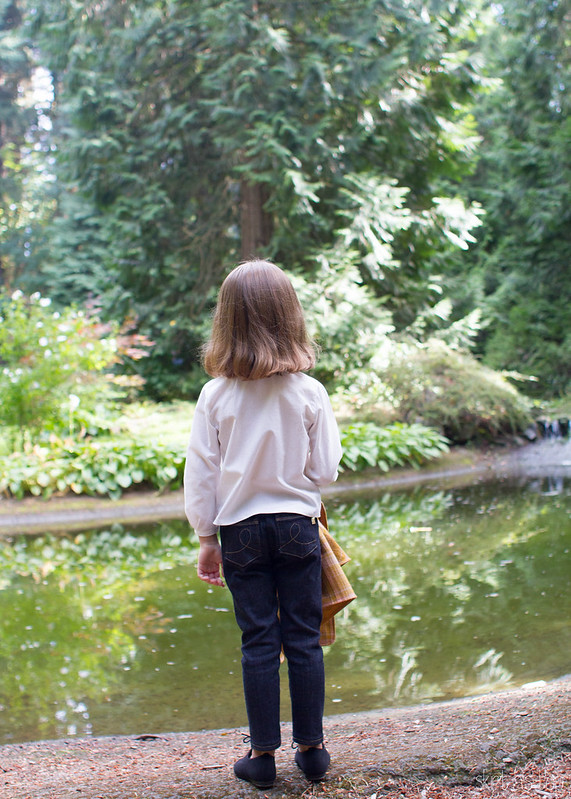 i felt really grateful to Jess and Celina for lining up fabric and pattern sponsors for STYLO – i didn’t have to spend much of my own money to create this look (or the villain look which i’ll blog about next!) and i feel like that was really solid of them.  i actually had a gift certificate for the yarn and the Botanics cape lining and buttons were all in my stash, so i only bought the shoes (affiliate link) just for STYLO.

if you’d like to give them a whirl, Michael Levine is offering a STYLO discount!  use the code “STYLO10” at checkout for 10% off your entire fabric order.

back in a bit with the villain look!

14 thoughts on “girl detective for STYLO 3”