my guest today is Jane of Buzzmills.  when i was pulling together my invitation lists for Vintage May this year, Jane quickly came to mind.  way back when i put out my sweet tartan dress tutorial, Jane sewed one!  and when we did Vintage May, Jane sewed along!  it’s just so exciting for me, and i’ve always been grateful to her for that (she sewed my summer nightgowns too!).  Jane is a creative soul, and though her blog you can see she is totally committed to instilling her kids with that creativity as well.

my favorite thing Jane has made is this dress – it’s GORGEOUS.  i love that she encourages her kids to be awesome and also love that she sews for herself and home too.

her post today is pretty great – look at that toddler belly framed by stripey suspenders!  teehee!  go check out Buzzmills to see the rest!  thanks Jane!

UPDATE: and don’t miss her smocked playsuit, posted a day later!!  so perfect. 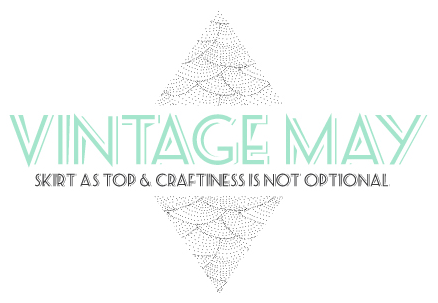 my guest today is two years in the making!  during the first Vintage May, a gal named Celina of petit á petit and family emailed me to see if she could add a few photos to our flickr group of things she’d sewn a while ago.  at that time, she only rarely blogged her sewing, but she was already making quite the name for herself on Pinterest.  that’s where we first found each other (she now has almost 3 million Pinterest followers, holy cow!!!).  in the two years since, Celina has been sewing a LOT more regularly, and her impeccable taste quickly got her noticed in our little community!  she seems to be involved all sorts of cool projects these days – she’s both co-creator of STYLO magazine and designer in the very cool Willow & Co. pattern collective, both of which are the new hotness.

i love how Celina uses color and pattern and always tries new things – this outfit blew me away, as did this one, and all of this was so great too!  i love how she really commits with her photography and styling.  Celina is just an inspiring person with tons of ideas, and i love people like that.  they push everyone around them to be more creative!

for her post today, Celina made a fantastic swimsuit and fancy coverup inspired by 70s bohemian style for her daughter – and its all gorgeous!  go see!

rumor has it there’s a pattern in the works, too!  awesome.

you know the drill – head on over to craftiness is not optional to check out the beautiful garment Jess’ guest made today!

we’re back with week 2 of vintage may!  last week, Jess and i launched this year’s festivities with a joint photoshoot with our little gals, and today, we both decided it’d be fun to sew vintage-inspired looks for ourselves!

i decided to sew a look inspired by the female propaganda icon of World War II, Rosie the Riveter.

“Rosie” was the face of a government campaign to bring women to the workforce to take on jobs traditionally done by men while they were away at war – especially in munitions and aviation factories.  it portrayed factory work as patriotic, and Rosie has since been adopted as a symbol of women’s strength and feminism.  i can get behind that!  the expectation was that women would return to their former jobs/lives after the war, but the symbol of Rosie lived on, as women realized they could do work traditionally done by men and they could do it well!

in doing the research for this post i saw that the “we can do it” poster commonly associated with Rosie the Riveter isn’t actually supposed to depict her which is a bit confusing, so hey, let’s talk about the clothes.

i wanted to make an outfit that nodded to Rosie’s traditional blues, but could be worn as present-day wardrobe staples as well.  i used Grainline Patterns to create both the shirt and the shorts.  it was the first time i’d used Grainline garment patterns (i sewed a Portside Duffle around Christmas) and i’m totally in love with these clothes!  i keep finding excuses to wear them!  i’m now a Grainline groupie!

the shirt is the Archer, sewn in a navy swiss dot from Mill End.  i sewed a size 8 straight up and it fits great.  it’s flattering and easy to wear and i love wearing it.  i actually used the Archer sew along on the Grainline website as my instructions – the one thing i noticed with Grainline is the actual pattern instructions are pretty bare bones, but Jen does a great job of posting photo sewalongs on her website that even include Wes Anderson-style videos for the trickier parts.  love that.

a button down shirt is the kind of garment where taking your time on the details really pays off and it can be intimidating; but the result is just so great it was worth the time and effort for sure.

aaaaand since i’m not quite back to my normal shape around the midsection and need to be able to nurse a baby on a moment’s notice, it’s a perfect wardrobe staple for me right now.  i definitely need more Archers in my closet!

now the shorts!  they are the Maritime Shorts, also by Grainline, also in an 8 with no modifications.  and again, there is a sewalong, which i used as my instructions and loved (especially since i got stuck on step 1 – be sure to snip into your seam allowance BEFORE you try to match those curves up!).  this was my first time inserting a zip fly and though i have no photos of it finished, it went in great!  like a dream!  new technique mastered.

i’ve actually been struggling with finding good shorts most of my adult life – i don’t want to look like a teenager but i don’t want knee-length either, and most of the shorts i go try on are either too short/tight or too long/matronly.  i love how these fit.  maybe i’d add a tiny amount of length next time but they’re not uncomfortably short for me by any means!  i sewed them in a nice chambray (again from Mill End) and they’re super comfy.  ready for summer!

my headscarf is just a 31″ square of red polka dot cotton (similar here).

now as badass Rosie, i INSIST you go check out Jess’s creation.  she looks so great in her vintage-inspired wear.  and hey, she took my photos today!  super fun to have a fellow sewing blogger as photographer – too bad she lives so far away and we can’t do it more often!  thank you so much, Jess!

my guest today is Kelly from cut cut sew.  i first found Kelly when she did this great maternity top tutorial for Rae FOUR YEARS AGO!  she was flickr-only for a long time, but started blogging last year, and it made me so excited when she did!

as i dabble more in sewing for myself, i seek out bloggers that do it regularly – it’s a whole different group than the “mostly kids clothes” blogs, so it takes more effort to find them!  Kelly is so great at it.  she actually moved to Portland last summer and i’ve had the pleasure of hanging out with her and her two sweet little gals a few times – every time i see her, she’s rockin’ the handmades!  her minoru jacket is one of my all-time favorite sewn creations in all of blogland, ever (it’s inspired me multiple times and the jacket is even more amazing in person)!  the girl makes thoughtful, daily-wear clothes – Kelly has an actual wardrobe, not just a closet full of pretty dresses.  she makes jeans, button down shirts, sweaters, leggings, etc. Kelly hasn’t purchased any clothes from a store in a year and a half!  THAT’s impressive, and so inspiring.  plus in person, kelly is just laid-back and cool.  i like her a lot.

Kelly made a 70s Diane von Furstenberg-inspired wrap dress, and it’s sooooo lovely.  check it out! 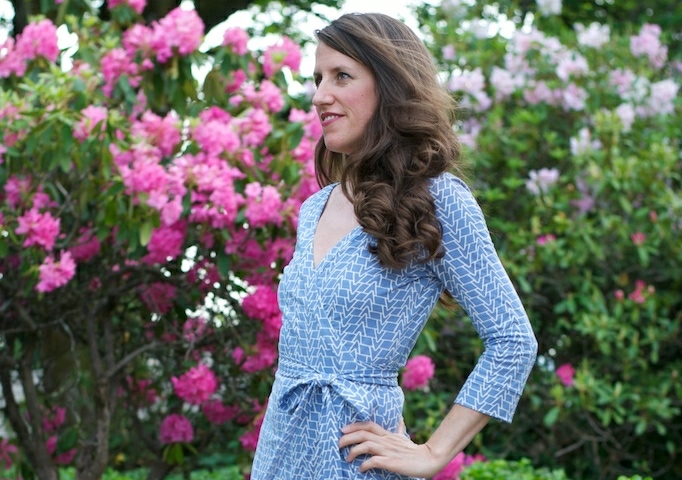 my guest today is Brooke from Oliver’s Fancy.  Brooke has two adorable little boys and she is really great at sewing awesome clothes for them (check out all she accomplished during spring KCW!).  the hardest trick of kid sewing is making it look interesting but still passable as store-bought, and that sweet spot is much smaller for boy than for girl sewing.  to me, Brooke nails that balance perfectly, even in costume form!  if you have little guys to sew for, she’s one you’ll want to follow.  she also sews for herself quite a bit – I especially love her weekend getaway blouse and washi #2.  plus, i’m super impressed by gals that sew for their husbands, and Brooke does it with aplomb!

for Vintage May, Brooke sewed the cuuuuutest 50s rockabilly look for her son and oh man look how adorable he is!!  i can’t even handle it.  check out the rest of her look here at Oliver’s Fancy.

so great, right??  don’t forget to check out craftiness is not optional for Jess’ guest!