despite my best efforts to dress her in neutral colors as a baby and avoid too much pink, my daughter claimed it as her most favorite as soon as she learned her colors.  she wants pretty much everything to be pink.  last year for her second birthday, i organized an “up party” since it was her favorite movie at the time (photos here and here and her dress here).  this year, i indulged her and just went with the pink.  a couple weeks before the party, i started a pinterest board and rounded up a bunch of great party ideas i remembered from around the web.  the post-it note big 3 above was a combination of this post-it note wall art and this giant number from oh happy day!  i also hung twisty streamers like i saw on aesthetic outburst, only i made them two-tone with lighter and darker pink.

my main “statement piece” was a flower piñata like i’d seen on inchmark  last year.  it took a long time to cut out and stick on all of the petals (my husband did most of the cutting out), but i love it.  i didn’t have the heart to break it.  i’m planning to hang it in her room once i’m ready to take it out of the living room, but i do love the pink pop against our walls for the time being. 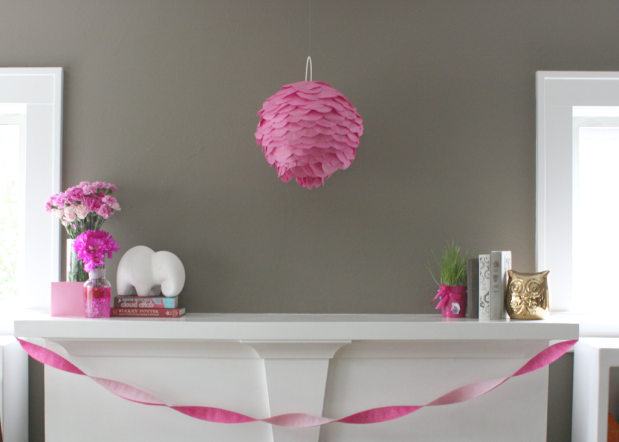 the whole time i was working on it, i had “the high road” by the broken bells stuck in my head.

(maybe james mercer and danger mouse are inchmark fans, too.)

we had a 9am breakfast party, since two of em’s cousins had a t-ball game later.  breakfast parties are great!  parents of young children (and grandparents) are up early anyway, and generally in a good mood as long as you have plenty of coffee around.  we had a fun cereal bar (a la cakies), fruit, huevos rancheros, sausage, and sticky rolls.  for her “cake,” my mom made breakfast muffins with strawberry cream cheese frosting and fresh strawberries on top.  i punched out a bunch of pink and gold confetti and sprinkled that around the table, and used my grandma’s vintage bauer pottery to display em’s special birthday muffin with three candles.

i made her skirt loosely based on this crewcuts version (also discovered on pinterest, seriously my favorite site on the internet).  it’s a layer of voile and a layer of batiste with the selvedges as the hems.  then i hand-tacked on a row of sequins.  she looooooved it. 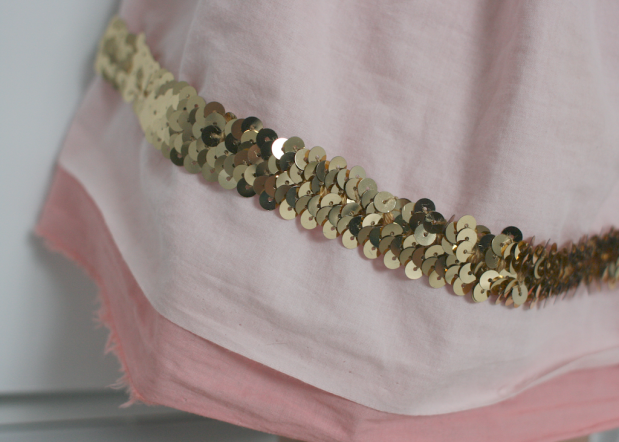 her big gift from us was a dollhouse with lots of accessories from various family members.  she also got a real tambourine, a soccer ball, clothes, and coloring stuff.  but her most-used gift so far has been the buddha board (which i discovered via the artful parent, though i think i remember seeing them way back when i was younger).  she likes to practice her “smiley faces.”  pretty good, eh?

once she finishes each drawing, she plays “black out” and just paints the whole thing with water, then moves on to something else while it dries…then comes back and paints it out again.

she really loved her pink party, and i’m still trying to come to grips with the fact that my little girl is now THREE.  i love her so much!