FINALLY!  a lovely double gauze garment just for me! 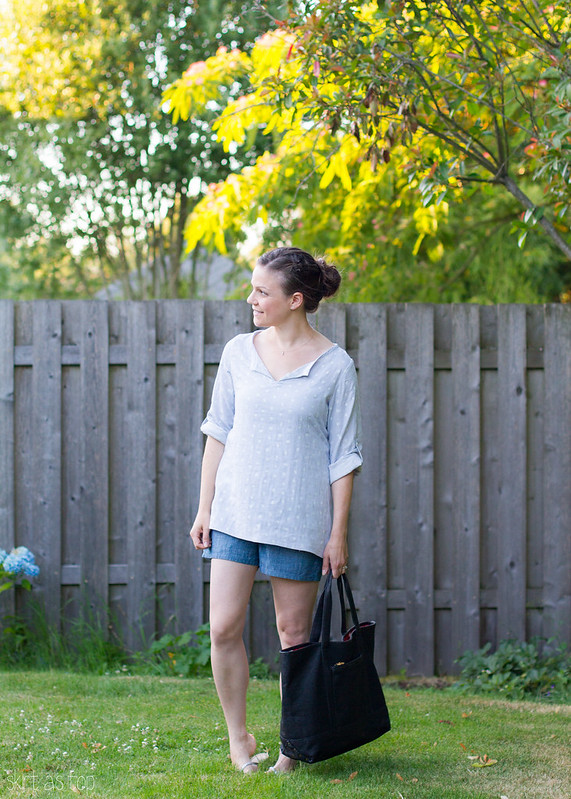 i’ve bought double gauze fabric a few times, and i’ve always ended up using it for those pesky kids.  haha.  i actually intended on making something for E with this too, but it was just perfect for my next self-sewing project….even though i had only 1.5 yards of it, about half a yard less than the pattern calls for.  there was a lot of planning before i cut. 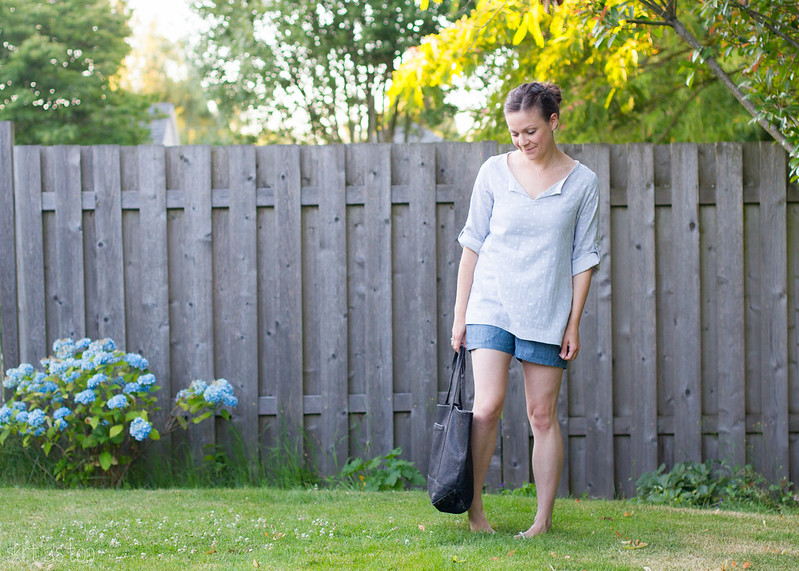 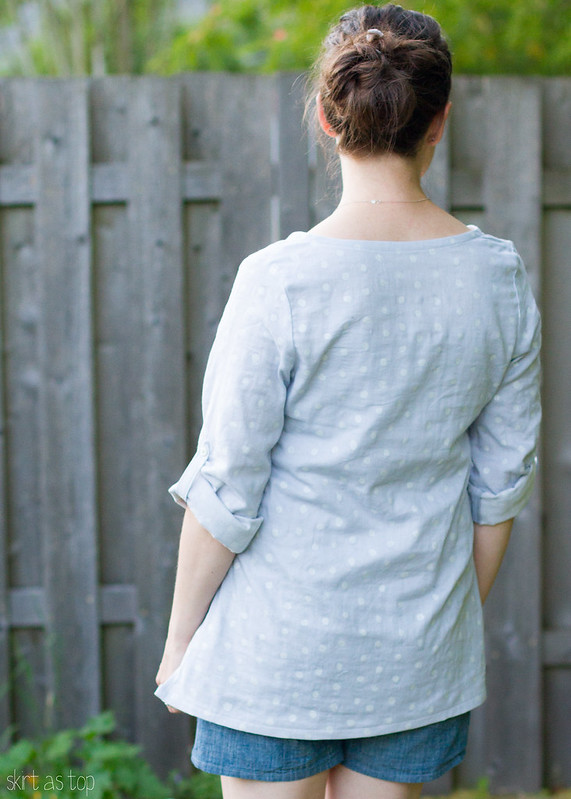 i had heard the Shearwater Kaftan was a quick sew, every version i’d seen seemed to fit well, and i’d never seen people mentioning any major struggles with it, which is always a good sign.  the reputation was right! it was super quick and easy to sew!  just a couple hours for me, and that included a break to get the baby back to sleep in the middle. 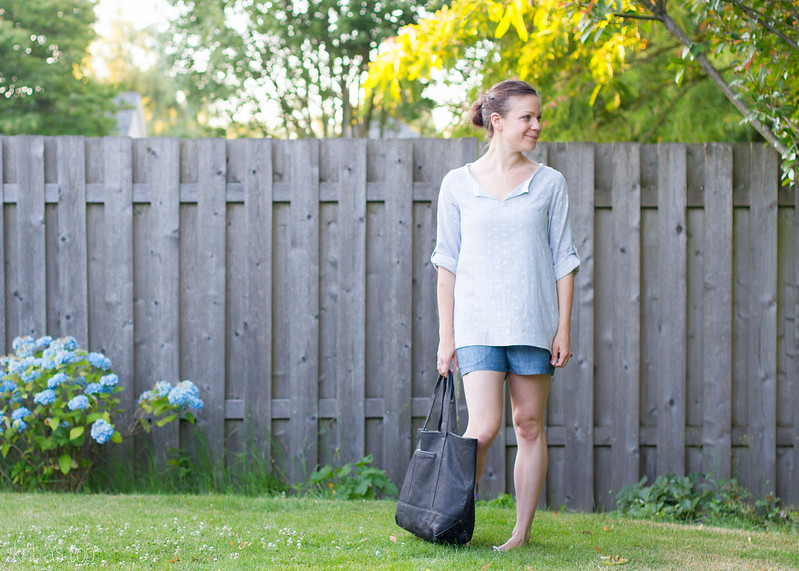 i made the small and the fit is just a tiny bit tight through the chest, but what isn’t these days?  it’ll be fine after the little fella is weaned, so i’m not sweating it.  all these tops i’ve been making lately have been nursing-friendly (i wear a nursing cami underneath, then a flowy/knit/button up shirt over the top) but not specifically modified for nursing because it’s such a temporary state of being.  so other than the “temporary body shape making something tight that normally wouldn’t be” issue, i love the way it fits!  the top is loose but not overly voluminous, and feels really flattering.

the one thing i did see from others was that the neckline facing shows when it’s worn, so rather than just serging the facing edge, i turned it under and topstitched, then tacked it down at the center with a few hand stitches. i also turned my bias tape all the way to the inside rather than keeping it visible on the outside, which made my neckline a bit wider than designed. 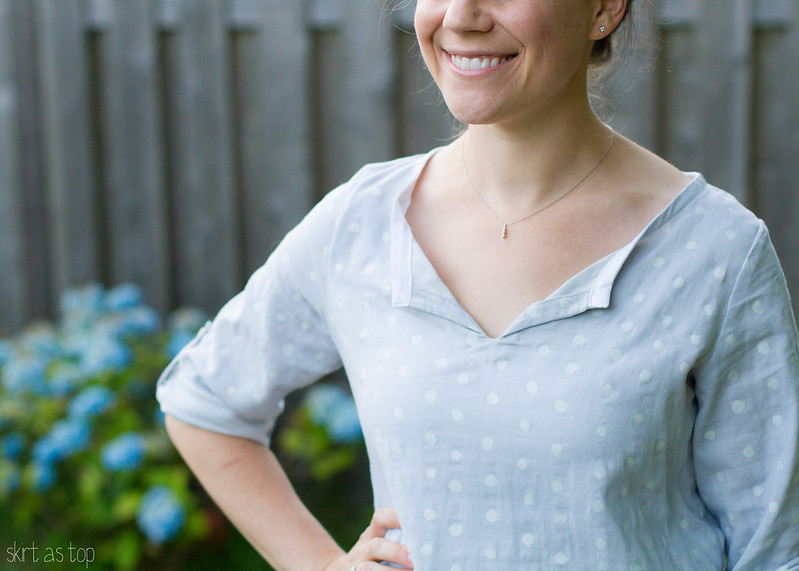 the fabric is dreamy, right??  it’s Nani IRO Pocho in light gray with subtly glittery white polka dots.  it’s double gauze, as i mentioned, which makes it so soft and drapey (double gauze is two layers of gauze tacked intermittently so it acts as one fabric).  i bought it at Bolt, but your friendly internet purveyor of fine Japanese fabrics, Miss Matatabi, has it online along with quite a few other color ways of the Pocho!  Nani IRO month = every month, you guys. 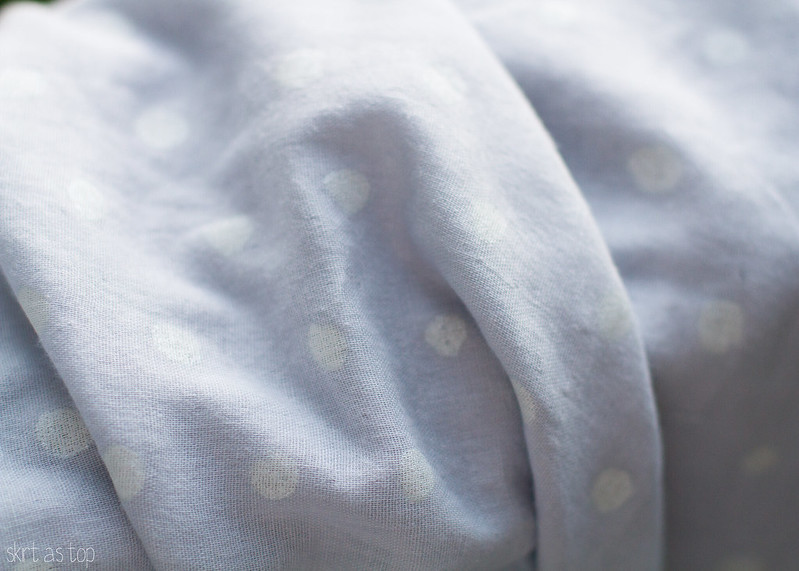 sewing with double gauze is a bit like sewing with knit – the weave is so loose, you can stretch it to fit along curves (like sleeves to armholes) and i find a walking foot is very helpful to keep it feeding evenly.  it’s hard to get sharp points and it likes to shift, so use plenty of pins when you sew and steam when you iron. 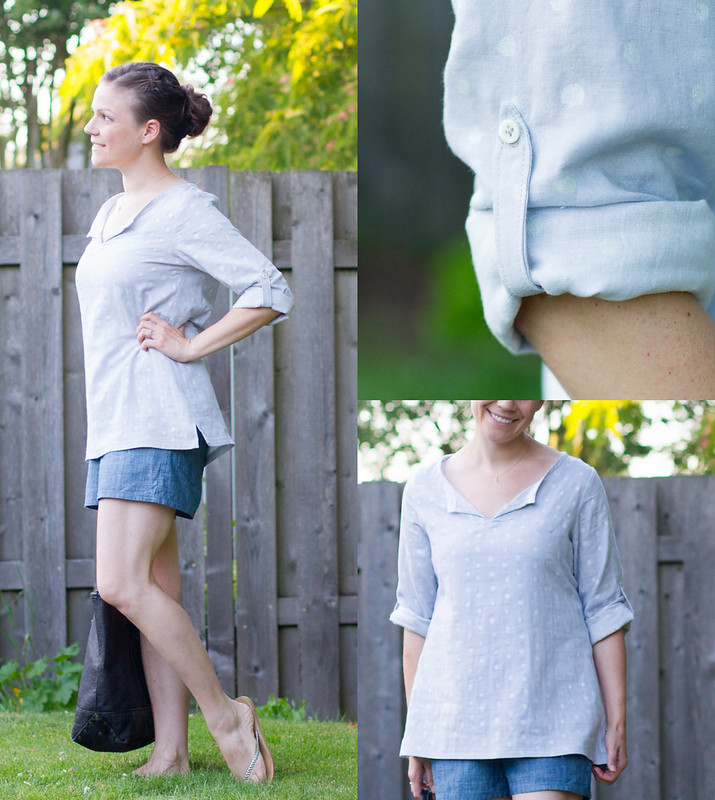 i love the sleeve tabs on this shirt and probably won’t ever wear them full length!  i just like to roll my sleeves.  it’s a cute, summery look.  btw, i added interfacing to the inside of the sleeve tabs so the double gauze would support the tiny buttonhole. 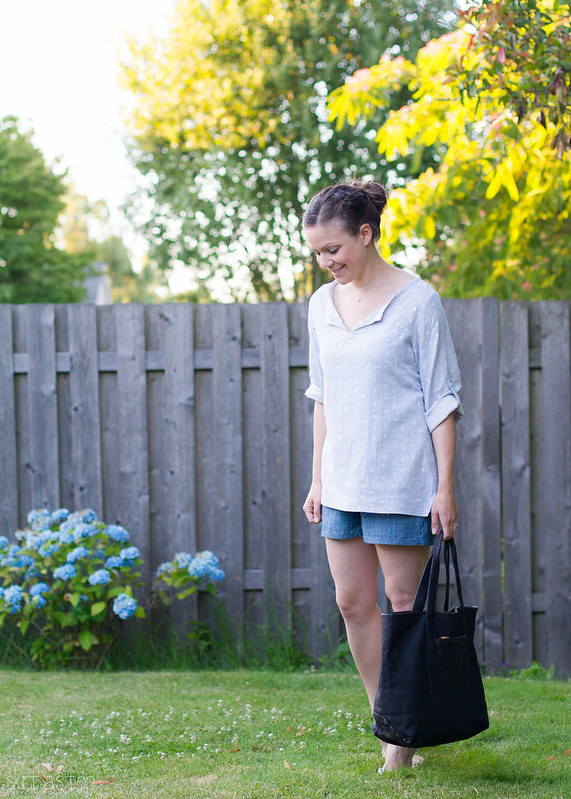 one thing that tripped me up a bit was the PDF pattern piecing – i prefer a consistent margin around all four sides so i can chop off two sides and overlap them easily (this method), but this pattern had varying margin widths so i couldn’t do that.  since it was only a front, back, sleeve, and a couple little pieces though, it wasn’t too much extra work to trim the pages individually, and the rest of the pattern instructions were clear and easy.  i think this would be a nice starter pattern if you’re looking to sew for yourself, since the fit is forgiving, it’s fast, and there aren’t any closures. 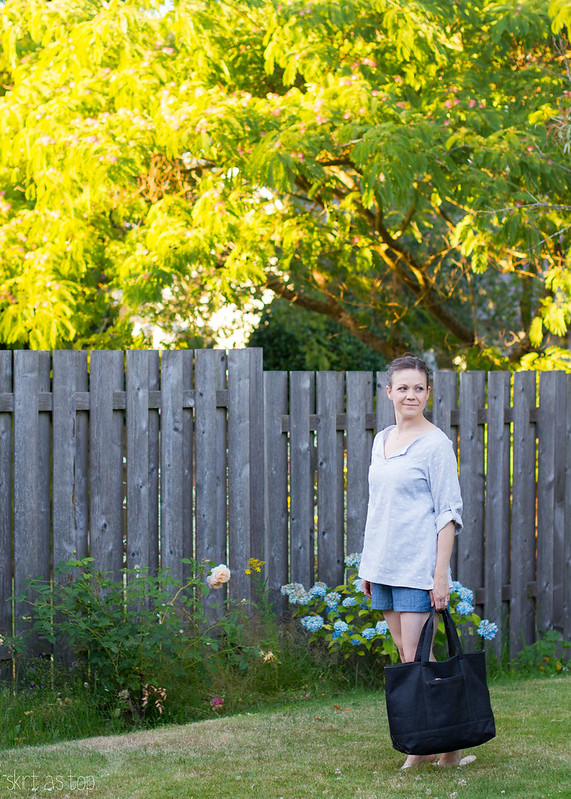 i should mention that i’m also wearing my chambray maritime shorts – i actually tried a few different pairs of storebought shorts on with the shirt but these were my favorite fit!  love that.

OKAY!  giveaway time.  Toni has generously offered one Make it Perfect PDF pattern of your choice to one lucky winner!  i set up a rafflecopter for ya…click through to enter.

and be sure to follow along the Make it Perfect Pattern Parade! 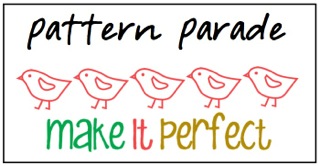 P.S. the usual disclosure about receiving a free pattern and being honest in my pattern review.

P.P.S. thanks again to the ol’ ball and chain for taking my photos!  :*